EURUSD declined to its lowest level since January 2017, hitting the 1.0345 support level on Friday. The aggressive selling interest has continued since it began last May, and the technical indicators have been in a negative zone in the last few months as well. The RSI is flattening near its 30 level, while the MACD is still strengthening its bearish momentum below its trigger and zero lines.

Should the latest bottom at 1,0345 crack, the price could initially test the 1.0220 support, taken from the inside swing high on July 2002. Sliding lower, the pair could flirt with the parity level before testing the 0.9600 low from August 2022.

In brief, despite its resilience above the more-than-five-year low of 1.0345, EURUSD has yet to show any clear signals for bullish corrections, remaining exposed to downside tendency. 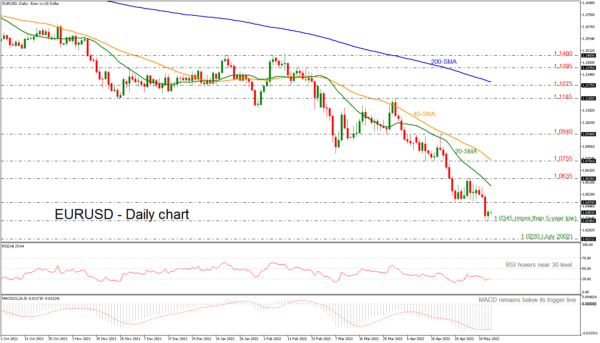