– The US Dollar continues to float higher, driven by concerns surrounding other currencies rather than domestic influences: the US government shutdown means that most economic data has stopped being released.

– Neither the Greek nor the UK government is expected to fall today, and traders aren’t pricing in strong odds of a significant move (overnight and 1-week implied vol remains low for EUR/USD and GBP/USD).

Looking for longer-term forecasts on the US Dollar? Check out the DailyFX Trading Guides.

The US Dollar (via the DXY Index) has managed to push slightly higher on Wednesday ahead of key no-confidence votes in Greece and the UK. The US government shutdown appears to be a positive for the greenback, as the lack of economic data being released means that traders don’t have any new, negative news to price-in (and thereby price-out rate hikes by the Federal Reserve in 2019).

Key releases canceled this week include the November US Advance Trade Balance and December US Retail Sales. But it only may be a matter of time before the shutdown starts to show up in the real economy; the White House itself admitted that the economy is losing -0.1% of growth every week as opposed to every two weeks. The economic analysis suggests that the longer the shutdown goes on, the more it compounds; the drag on the economy will accelerate as time passes. It’s possible that Q1’19 US GDP is close to 0% if the shutdown drags on for a few more weeks.

Path Forward for May, UK Unclear

We’ve seemingly reached another seminal moment in the Brexit process. After an historical defeat in parliament, UK Prime Minister Theresa May is now facing down a no-confidence vote from Labour party leader Jeremy Corbyn. But with reports afoot that the Tory party will stay unified and the Northern Ireland DUP – the Tory’s coalition partner in the majority – will back May suggests that the Labour-led no-confidence vote will falter. Even if some backbench members call for otherwise, that Labour party leader Corbyn is still pro-Brexit means getting to a second referendum is still a distant outcome.

It almost seems destined that Brexit-watchers will declare that by surviving the no-confidence vote, May’s hand has been strengthened as she departs for Brussels later this week. Let’s not kid ourselves, however: May will have little influence over the EU’s Brexit negotiator Michel Barnier. The calculus for the EU and its member countries haven’t changed, and by no means are they obliged to make Brexit any easier for the UK. The path forward for May and the UK remains unclear, but an extension to the March 2019 deadline seems very possible to avoid the cliff-edge, no-deal “hard Brexit.”

On the eastern front, investors appear to be paying little attention to Greece, the most indebted member of the Eurozone. After four years as prime minister, Syriza’s Alexis Tsipras is heading to a no-confidence vote just months before a general election would have to take place anyway; Greek laws call for another election before October 2019. Despite PM Tsipras’ anti-Euro, anti-austerity policy positions, he has proven to be a reliable partner for the Troika, helping implement structural reforms and guide the country back towards a primary surplus (government spending less tax income, excluding interest paid on government debt).

Even if Tsipras loses, his replacement is likely to be more EU-friendly: the center-right New Democracy party currently enjoys an 8-12% lead in polls over Syriza. The fact of the matter is that Greece is not the thorn in the Euro’s side that it used to be; in fact, there is an argument to be made that France – not Greece or Italy – has been the biggest problem for the Euro in recent weeks. It would be surprising if the results of the no-confidence vote had any material impact on the Euro. 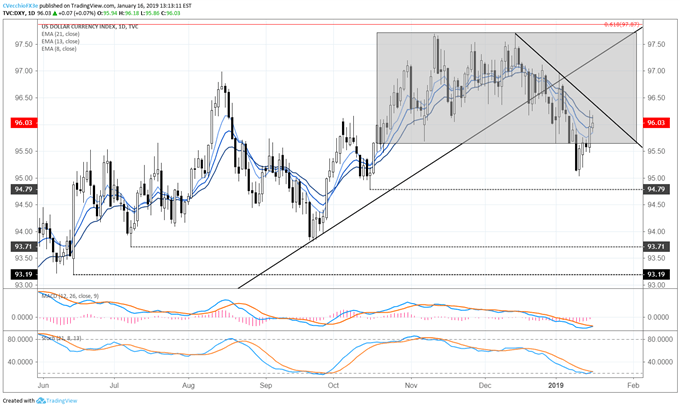 The DXY Index’s bullish outside engulfing bar yesterday coincided with a bearish outside engulfing bar in EUR/USD (no surprise given the Euro’s 57.6% weighting). Concurrently, the move puts the DXY Index back in the near-three-month consolidation above 95.65 range support. Price has rejected attempts to climb back through the daily 21-EMA, but yesterday’s gains have seen price eclipse both the daily 8- and 13-EMAs. Similarly, both daily MACD and Slow Stochastics have turned higher (albeit still in bearish territory). What was once a technical structure ripe with potential for a bearish breakdown now has morphed back into something neutral. Exogenous pressures (i.e. Brexit, the US-China trade war) remain extreme in their influence.

View our long-term forecasts with the DailyFX Trading Guides