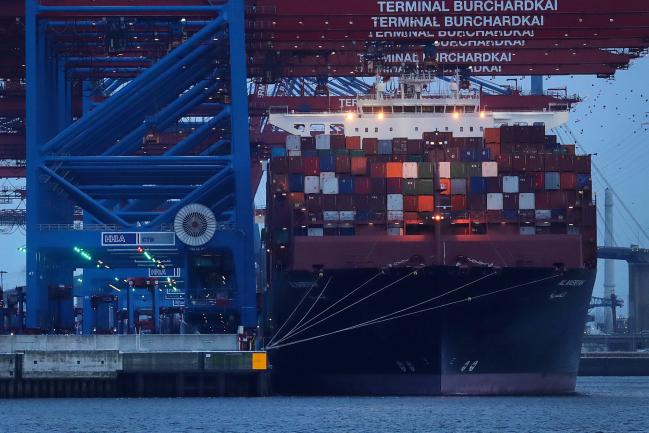 © Bloomberg. Container ship Al Nasriya, operated by United Arab Shipping Company (UASC), sits moored at the HHLA Container Terminal Burchardkai at the Port of Hamburg in Hamburg, Germany, on Tuesday, Feb. 27, 2018. The euro-area economy has been put on notice that there’s no guarantee the good times last forever.

(Bloomberg) — Even the prospect of the European Union securing exemptions from U.S. tariffs couldn’t shield the region’s financial markets from the crossfire of escalating global trade tensions.

Equities in Europe slumped the most in three weeks, a swath of IPOs were rattled and government bonds surged as President Donald Trump slapped tariffs on Chinese goods. Earlier in the day the tone was set when a wave of output reports from across the region all missed estimates. The euro, which started the day in the green, eventually reversed.

“The European economy wouldn’t be directly affected by Trump’s tariffs, but the blowback would affect everyone,” said Will Hobbs, head of investment strategy at Barclays (LON:) Plc in London. “With the global economy now so tightly intertwined and supply chains so complex, a trade war would be painful for all.”

In some ways, Thursday became a perfect storm for European risk assets. Technology companies were already under pressure in the wake of Facebook Inc (NASDAQ:).’s data scandal, while a selloff in commodities has battered miners. The disappointing economic data undermined expectations that euro-area interest rates will rise sooner rather than later, and banks duly slumped.

The three industries led the equity selloff as the Index fell 1.6 percent, the most since March 2.

The yield on 10-year bunds dropped six basis points, the most since December. The securities are rising as Citigroup Inc (NYSE:).’s economic surprise index shows economic data from the continent trailing expectations by the most since March 2016, with inflation still languishing well below the European Central Bank’s just-less-than 2 percent goal.

As investors start to look past the end of the ECB’s quantitative easing, market pricing has now pushed back the estimated timing of a rate increase to mid-2019. That compares with a projection for next March as recently as two weeks ago, and helped spur the decline in banking stocks.

“There’s a combination of many factors all pointing in the direction of lower bund yields,” said Antoine Bouvet, an interest-rate strategist at Mizuho International Plc. “The ECB has reassured the market about the risk of premature tightening and the supply-demand picture in the coming weeks is supportive for bunds. Add to that the growing worries about the trade tensions and euro fixed income looks more attractive than riskier alternatives.”

Money markets are now pricing a 10 basis-point hike in the ECB’s deposit rate in June 2019, which would be the first increase in a benchmark rate since 2011.

Amid the turmoil, the biggest IPO in Norway since 2010 — a 6.4 billion-krone ($830 million) sale by silicon manufacturer Elkem ASA — slumped on its first day of trading Thursday after pricing at the lower end of the price range.

In the Netherlands, whose offerings market is just heating up, Alfen Beheer NV’s IPO priced at 10 euros a share, below the 11.25 euros to 15 euros sought by the maker of charging stations for electrical vehicles.