Data revealed that the Euro-zone’s final consumer price index (CPI) increased 1.1% on a yearly basis in February, less than an initial estimate indicating a rise of 1.2%, thus suggesting that the European Central Bank (ECB) is unlikely to wind down its monetary stimulus anytime soon as inflation continues to remain limp and significantly below the bank’s target. The CPI had recorded a rise of 1.3% in the previous month.

The US Dollar gained ground against a basket of major currencies on Friday, on the back of a string of upbeat US economic reports that painted a bright picture of the world’s largest economy.

Data indicated that the flash Reuters/Michigan consumer sentiment index in the US unexpectedly climbed to a 14-year high level of 102.0 in March, reflecting a favourable economic outlook amongst Americans and defying market expectations for a drop to a level of 99.2. In the prior month, the index had registered a level of 99.7. Moreover, the nation’s industrial production rebounded 1.1% on a monthly basis in February, surging to a 4-month high level and suggesting that industrial sector is likely to gain further strength in the coming months. Industrial production had registered a revised fall of 0.3% in the prior month, while markets were expecting for a gain of 0.4%. Further, the nation’s manufacturing production recorded a rise of 1.2% MoM in February, after declining by a revised 0.2% in the previous month. Market participants had envisaged manufacturing production to rise 0.5%.

In other economic news, JOLTs job openings in the US climbed to a level of 6312.0K in January, beating market consensus for an advance to a level of 5917.0K and after registering a revised reading of 5567.0K in the previous month.

Moving ahead, traders would keep a close watch on the Euro-zone’s trade balance and construction output data, both for January, slated to release in a few hours.

The currency pair is trading below its 20 Hr and 50 Hr moving averages. 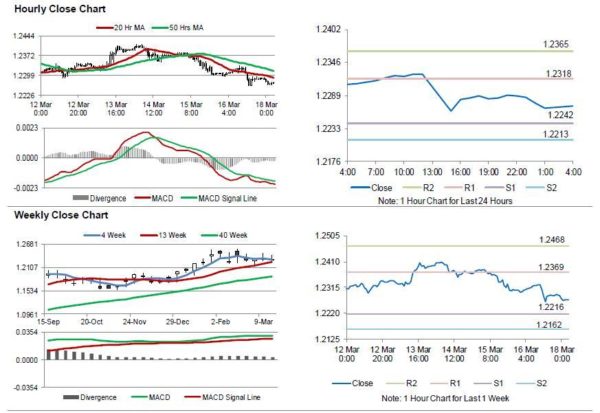