Blog - Latest News
You are here: Home / real_news / Euro Week Ahead: EUR/USD Heading for Best Month Since 2010? Eyes on Eurozone...

How to Trade EUR/USD

The Euro largely outperformed the US Dollar in what was a mostly data-deprived holiday week for the single currency. Looking at the chart below, EUR/USD is on course for its best month since September 2010! The rapid appreciation of the Euro continues to follow a story of relativity. That is, the focus has been on the Federal Reserve for the most part.

What we have been hearing from Fed policymakers of late is that the tempo of rate hikes is likely to slow in the coming meetings. This was further reinforced by the FOMC meeting minutes last week. The report underscored that December is likely to shift to a 50-basis point rate hike, whereas before it was 75. But, one thing that traders need not forget is that tightening is still happening.

The minutes also revealed that rates would likely peak at a higher point than previously expected. While this continues to be hawkish, markets care about relativity. A downshift in the central bank’s tempo is thus not insignificant. Meanwhile, ECB Governing Council member Vasile noted last week that the “current tempo of hikes is adequate”. So, as the ECB goes as planned, the Fed is adjusting its path.

This is not a ‘pivot’, far from it. Traders need to remember that data is critical, and plenty of it will cross the wires. In Europe the Euro as Eurozone core inflation, German inflation and jobs data awaiting. Markets are pricing in at least a 50-bps ECB rate hike in December, with odds of 75 very loosely being considered. As such, upside surprises in the data could reinforce the latter.

Meanwhile, the US Dollar also has plenty to contend with. These include the Fed’s preferred gauge of inflation, PCE core, and November’s non-farm payrolls report. Remember, the central bank is adjusting its pace strategically as tightening works into the economy with lags. Still-rosy figures could easily keep the central bank on its current path. Those risk bringing a downturn in market sentiment, boosting USD. As such, it remains too early to call the Euro’s surge a turning point.

Receive timely and compelling market commentary from the DailyFX team

The Euro Heads for an Amazing Month 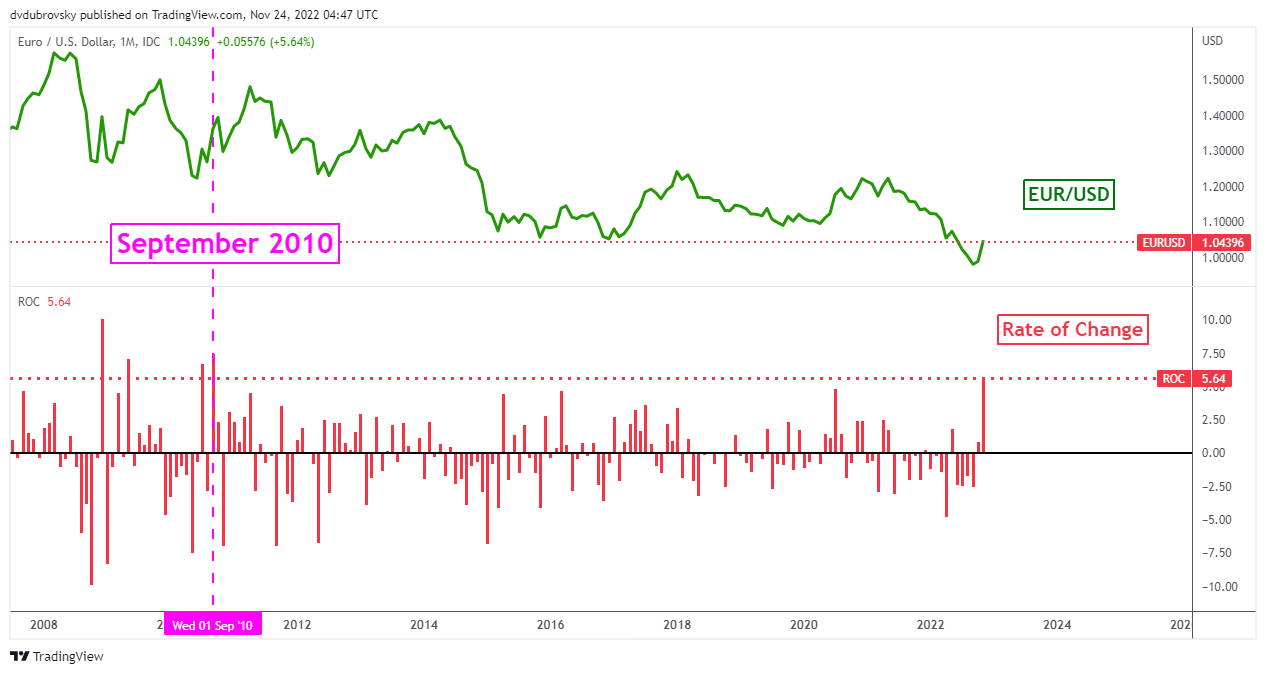 US Dollar Outlook – Will Heavyweight Data Stem the US Dollar’s Ongoing ... Japanese Yen Weekly Forecast: 140 Key for USD/JPY Ahead of U.S. Economic Da...
Scroll to top