FOREX: The dollar index, which gauges the greenback’s strength versus six major currencies, was up, standing at 90.14 (+0.22%). Dollar/yen managed to pick up speed, rising to 107.66 (+0.28%), boosted by the strong rally in US treasury yields. Pound/dollar was flirting with two-week lows, last seen at 1.4060 (-0.20%) following a deep fall yesterday immediately after the BoE Governor, Mark Carney, signaled that the central bank may not rush to raise interest rates in May showing concern on this week’s discouraging economic numbers. Euro/dollar fell by 0.34% ahead of the European Central Bank meeting next week, where policymakers might give some clues on their plans to remove monetary stimulus. However, analysts believe that the central bank could hold a cautious stance on the face of this week’s disappointing data out of the Eurozone. Dollar/loonie was in a range on Friday after completing two bullish days, moving marginally higher by 0.02% before the release of the Canadian CPI later today. Antipodean currencies were trading significantly lower, with aussie/dollar and kiwi/dollar being down at 0.7692 (-0.45%) and 0.7216 (-0.76%) respectively. Euro/Swiss franc turned lower to 1.1978 (-0.07%) after touching a fresh three-year high of 1.2004 during the Asian session.

STOCKS: European markets were mixed at 0933 GMT. The pan-European STOXX 600 was weaker by 0.12%, while the blue-chip Euro STOXX 50 was slightly up by 0.15%. The German DAX 30 fell by 0.07%, the French CAC 40 lost 0.08%, the Italian FTSE MIB traded higher by 0.30% and the UK’s FTSE 100 climbed by 0.37%. Asian equities closed lower except the Japanese Topix which finished the session up by 0.05%. US stocks dropped for the first time in three days yesterday, as technology shares came under pressure from trade and earnings concerns. Futures tracking US indices are poised to open lower today. 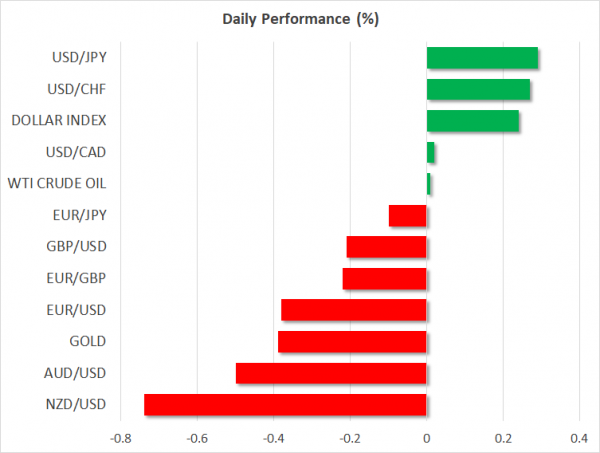 In terms of data, Canadian consumer prices and retail sales, as well as Eurozone’s preliminary figures on consumer confidence will attract the most attention later today. Brexit developments could also be in the spotlight as the latest headlines showed that the Irish border issue remains a sticking point in Brexit negotiations.

At 1230 GMT, Canada will see the release of the March CPI, with analysts projecting headline inflation to pick up by 2.4% year-on-year compared to 2.2% growth in February but the rise could be due to temporary factors such as increases in oil prices and higher minimum wages according to the Bank of Canada. On a monthly basis, consumer prices are expected to ease by 0.2 percentage points to 0.4%. Core measures, which are closely watched by the BoC, could be in focus as well, leading the loonie higher if they appear to be heading upwards towards the mid-point of the central bank’s target range of 1-3.0% (no analyst estimates are available for these indices). At the same time, the loonie could face additional volatility from retail sales if the numbers deviate from forecasts. According to analysts, consumer spending could expand by 0.3% m/m in February as in January.

In the Eurozone, April’s initial estimates on consumer confidence will come under review at 1500 GMT. The index returned to positive territory in November for the first time in almost two decades, giving a boost to the euro, but first estimates are now for the gauge to post negative marks again, falling by 0.2% in April. Should the confidence index decline more than anticipated, the euro could extend today’s losses.

In oil markets, investors will be waiting for the Baker Hughes oil rig count to come out at 1700 GMT after both the American Petroleum Institute and the Energy Information Administration indicated a surprising decline in US oil inventories, lifting crude prices to three-year highs. In case Baker Hughes shows a smaller number of active US oil rigs, oil prices could reach fresh peaks.

Meanwhile in the UK, optimism on Brexit was in doubt after reports that the EU is set to reject May’s proposals to avoid a hard border in the Northern Ireland after UK’s departure from the bloc. While the UK has not made any formal announcement on its plans on the issue yet, some officials said that a border should be applied to the whole of the UK, with the no part of the country remaining in the customs union and the single market. This, however, contradicts the EU preferences which want a border only in Northern Ireland, questioning whether progress in Brexit talks could continue.

As for today’s public appearances, Chicago Fed President, Charles Evans (non-voting FOMC member in 2018), and San Francisco Fed Governor, John Williams (voter), will be talking at 1340 GMT and 1515 GMT respectively. A news conference by the G20 Finance ministers will attract interest at 1645 GMT as finance ministers and central bankers from around the world are meeting in Washington this week for meetings of the International Monetary Fund and World Bank.