FOREX: Dollar/yen held strong at 105.63, trading at five-day highs during the early European afternoon, underpinned by hopes that a trade war between the US and China could be averted based on encouraging comments made by US and Chinese authorities in recent days. Not so hawkish remarks delivered by the Atlanta’s Fed President, Raphael Bostic (a centrist voting member) pressured the pair temporarily after Bostic said in an interview with the Wall Street Journal published today that tax cuts might boost growth but not inflation. The dollar index, which tracks the greenback’s strength against a basket of six major currencies, rebounded sharply from a more than a five-week low of 88.94 to an intra-day high of 89.35 as the euro and the pound erased today’s gains and were on track to finish the day in the red. The weakness in euro/dollar appeared after ECB member Erkii Liikanen took a cautious stance over an early monetary tightening, while disappointing data on the Eurozone’s economic sentiment in March added further losses to the currency. Meanwhile in the UK, the BOE Financial Committee policy meeting minutes showed that policymakers were considering to raise the amount of capital banks must put aside to mitigate unexpected shocks, arguing that risks have increased since the committee set the countercyclical buffer at 1.0% in Q1 2016. Euro/dollar and pound/dollar dropped to 1.2400 (-0.33%) and 1.4108 (-0.86%) respectively, while euro/pound extended upwards to 0.8791 (+0.55%). Against the yen, the pound lost the most compared to the euro, falling by 0.55%, while the euro was flat. Aussie/dollar and kiwi/dollar gave up gains as well, slipping to 0.7708 (-0.48%) and 0.7268 (-0.41%) respectively.

STOCKS: European equities opened substantially higher on Tuesday, following their Asian counterparts as investors felt more confident to put some money on riskier investments. The pan-European STOXX 600 was set to post its best day in seven weeks, surging by 1.34% at 1030 GMT, while the blue-chip Euro STOXX 50 was rising faster by 1.63% with all sectors being in the green. The German DAX 30 was up by almost 2.0%, the French CAC 40 jumped by 1.48% and the Italian FTSE MIB increased by 1.45% despite political uncertainties weighing in the background. The UK’s FTSE bounced off one-year lows, recouping losses made in the past four sessions. Asian equities maintained upside momentum, while US stock index futures were pointing to another upbeat trading on Tuesday.

COMMODITIES: Geopolitical risks in Middle-East and Venezuela, Libya and more importantly in Iran, as well as compliance by OPEC/non-OPEC members on the deal to reduce supply, continued to support oil prices. WTI crude was last seen at $65.76/barrel (+0.35%) after hitting a session high of $65.99 earlier in the day, while the London-based Brent peaked at $70.47/barrel (+0.33%). In precious metals, gold dived from a five-week high of $1,365.66/ounce touched during the Asian session to trade at $1,348.90/ounce. 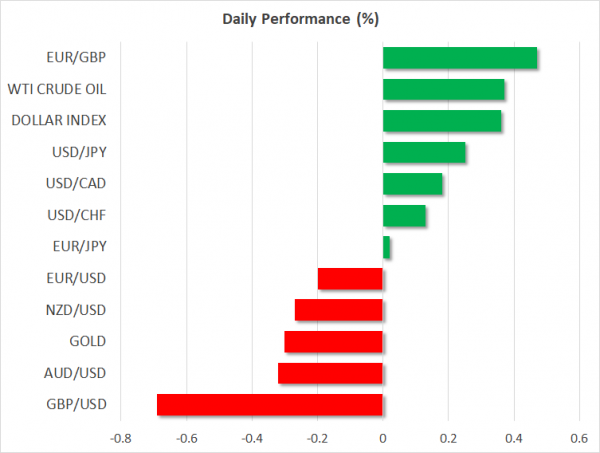 Day ahead: US Conference Board Consumer Confidence index pending

Economic releases will be limited during the rest of the day as a long Easter holiday weekend is approaching, with the US publishing readings on house prices and consumer confidence. Trade headlines during the day, however, could be more important for the markets as investors are eagerly waiting to see how the trade row story will play out, as risk-off sentiment continues to ease after the US and China expressed willingness to push forward negotiation.

At 1400 GMT, the S&P/Case-Shiller house price index will come into view, probably showing that house prices in 20 of the largest US metropolitan areas have slightly weakened in yearly terms in January but inched up month-on-month. An hour later, the Conference Board Consumer Confidence gauge is expected to rise to 131.0 in March compared to 130.8 in the previous month, posting a fresh 17-year high.

In energy markets, the American Petroleum Institute will publish its regular weekly report on US crude oil stocks at 2130 GMT. Oil prices have surged significantly over the last two weeks on the back of a weaker dollar and escalating tensions in the Middle East, touching two-month highs yesterday and any decline in API readings could add further gains to the market (no forecasts exist for the measure). This could somewhat ease concerns that increases in US output could harm efforts from OPEC/non-OPEC countries to curb oil’s supply glut. 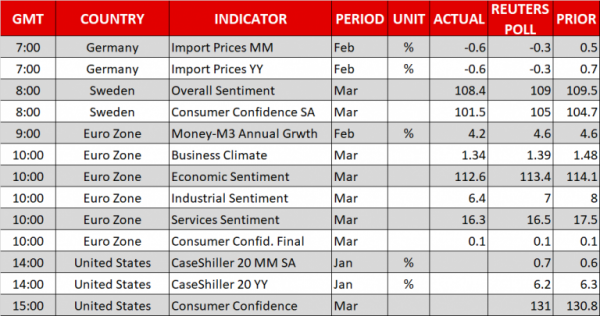