In Europe, the spotlight is German GDP statistics. The report is expected to show that output added 0.4 percent in the first quarter, marking the weakest performance since the three months ending December 2016. The on-year growth rate is expected to slow for the first time since the third quarter of the same year, sliding to 2.4 percent.

Economic data flow out of the Eurozone has increasingly disappointed relative to consensus forecasts since the beginning of the year, warning that analysts’ models may be rosier than warranted. That opens the door for still more downside surprises. Such a result on today’s release may reinforce the sense that the ECB will not rush to remove policy support in the near term, weighing on the Euro.

Later in the day, US retail sales data is due. These are expected to produce a slight on-month slowdown in April, with receipts adding 0.3 percent compared with a 0.6 percent gain in March. Absent a wild deviation from expectations, the release seems unlikely to draw attention away from Senate confirmation hearings for aspiring Fed policymakers Richard Clarida and Michelle Bowman.

Clarida is up for Vice Chair while Bowman was tapped for the community banking post at the US central bank. If confirmed, they will acquire votes on current policy decisions. Both are seen as in line with the mainstream of Fed officials. Comments affirming their support for gradual stimulus withdrawal may be seen as reinforcing the case underpinning recent US Dollar, offering it another upward push.

Currency market price action was relatively muted in Asia Pacific trade, but an acute awareness of looming Fed-related news seemed palpable in rates-sensitive currencies at both ends of the G10 FX yield spectrum. Appropriately enough, Japanese Yen declined alongside the Australian and New Zealand Dollars while the greenback edged up modestly.

See our free guide to learn how to use economic news in your trading strategy! 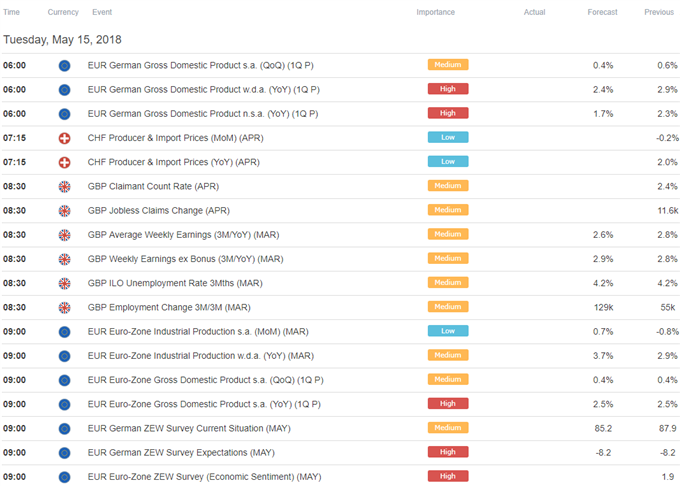