Blog - Latest News
You are here: Home / latest_news / Euro May Fall as PMI Data Sets the Stage for Dovish ECB

Eurozone PMI data headlines the economic calendar in European trading hours. The composite gauge is expected to show that the pace of manufacturing- and service-sector activity growth slowed for a third consecutive month in April, registering at the weakest in since January 2017. That may reinforce a recent dovish shift in the markets’ priced-in ECB policy expectations, weighing on the Euro.

Later in the day, US PMI statistics will enter the spotlight. A mixed result is expected, with manufacturing sector growth seen slowing while services pick up a bit of steam. On balance, anything shy of a dramatic disappointment seems unlikely to substantively derail the recent build in Fed rate hike speculation, especially while traders await the weightier first-quarter GDP print due Friday to make firm US Dollar bets.

The British Pound corrected higher as the trading week began. The move seems corrective after last week’s bloodletting. Sterling hit the lowest level in a month against an average of its top counterparts after inflation data underwhelmed and comments from BOE Governor Mark Carney cooled rate hike speculation. The priced-in likelihood of a May increase is now 42.8 percent, down from 96.2 percent one week ago.

See our quarterly FX market forecasts to learn what will drive prices through mid-year! 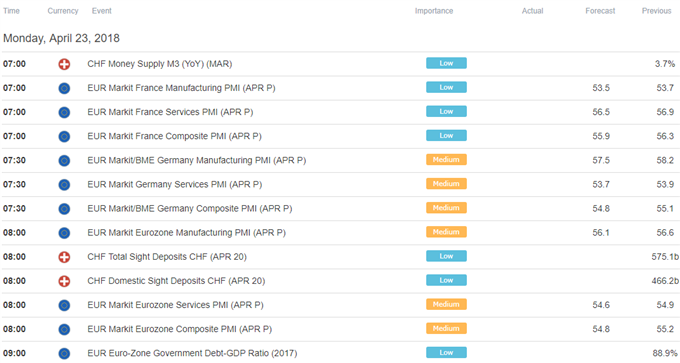 China may backslide on deleveraging if trade war looms

US Dollar Rallies to Seven-Week Highs Ahead of ECB, BoJ
Scroll to top