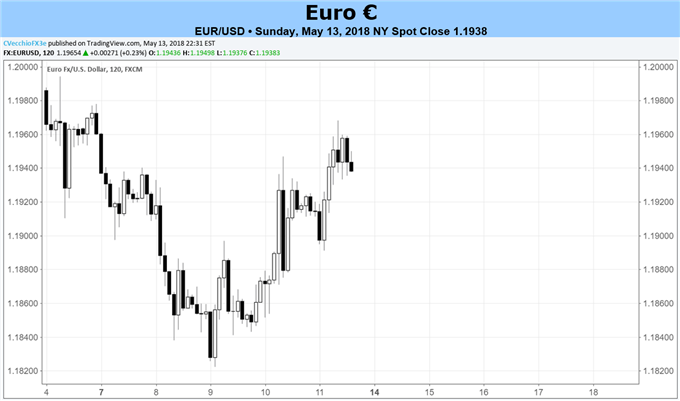 – The Euro fell against five of the seven other major currencies, although EUR/USD nearly closed the week positive.

– The IG Client Sentiment Index has returned to a neutral view on EUR/USD after the pair’s late-week rebound.

See our long-term forecasts for the Euro and other major currencies with the DailyFX Trading Guides.

The Euro finished near the end of the pack during a relatively quiet week – no EUR-cross gained or lost +/-0.60% – while the European Central Bank stayed largely quiet and the economic calendar offered few meaningful releases. EUR/USD, which was trading below 1.1830 last Wednesday, finished down only by -0.14% to close at 1.1938. EUR/CAD was the worst performing pair (-0.54%) while EUR/NZD was the best (+0.59%).

The prospect for an uptick in volatility among the EUR-crosses is high in the days ahead given the outlook for the economic calendar. Several ECB policymakers will speak over the course of the first three days of the week, including ECB President Mario Draghi on Wednesday in Frankfurt. There is no ECB meeting until June 14, so policymakers’ comments like the ones due out in the days ahead will have to satisfy.

On the data front, the first revision to the Q2’18 Eurozone GDP report is due out on Tuesday, but no change is expected from the initial readings of +0.4% q/q and +2.5% y/y. The report should have minimal impact on the Euro. Were a revision lower to materialize, given the state of data for the Eurozone – the Citi Economic Surprise Index closed last week at -97.9, but not before hitting its lowest level since September 2011 – it may not provoke that significant of a reaction either.

Elsewhere, on Wednesday, the final April Eurozone CPI report will be released, and the report itself should be a potent spark plug for volatility (the prime catalyst of the coming week). While Core CPI is due in unchanged at +0.7% y/y, headline CPI is set to decline to +1.2% from +1.3% y/y. Historically, when the spread between Eurozone and US inflation rates and bond yields diverge in the manner that they are presently, EUR/USD weakness emerges.

Finally, there still remains a sizeable net-long Euro position in the futures market. Speculators still held +120.5K contracts through the week ended May 8, even if that is a -20.4% decline from the all-time high set during the week ended April 17 (+151.5K contracts). While this isn’t as difficult a situation for the Euro as it was previously, there is still a lot of room for positioning to be trimmed. The path of least resistance for the Euro remains towards weakness.

US Dollar Slips in Quiet Turnover