The Euro moved down this past week after it failed to move above the 1.2370 resistance against the US Dollar. The EUR/USD is now trading well below 1.2350 and it remains at a risk of more losses. 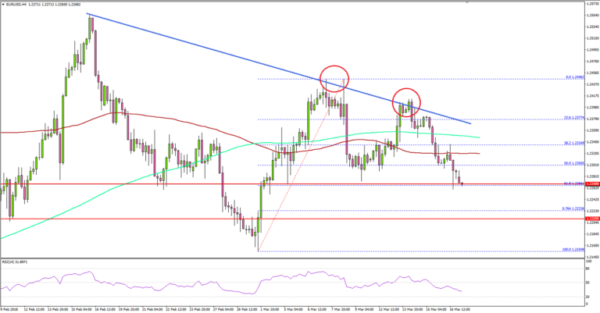 The pair is now trading well below 1.2350 and the 200 simple moving average (green, 4-hour). On the downside, the pair must stay above the 1.2260 support to avoid further declines.

A close below the 1.2260 and 1.2250 support levels could ignite more losses toward the 1.2200 level. On the upside, the pair has to break a major bearish trend line forming with resistance at 1.2375 on the 4-hours chart to gain upside momentum.

This past week, the US Industrial Production report for Feb 2018 was released by the Board of Governors of the Federal Reserve. The market was looking for a 0.3% rise in Feb 2018 compared with the previous month.

The real outcome was better as there was a rise of 1.1% in the Industrial Production, which was also better than the last decline of 0.3%. The report added that:

The overall market sentiment is favoring the US Dollar and EUR/USD could break the 1.2260 support level in the near term.