Blog - Latest News
You are here: Home / Analyst Picks / Entering Short NZD/CAD After Prior Checklist Has Been Met

Just getting started trading the New Zealand Dollar? See our beginners’ guide for FX traders to learn how you can apply this in your strategy!

In my previous analysis, I built the foundations of a fundamental argument to enter short NZD/CAD. However, we had a couple of critical event risks that needed to pass first. Those two were the Bank of Canada rate decision and a local inflation report. In the former, the central bank cooled near-term hawkish bets, but it’s still expected to overtake the RBNZ this year in terms of rates. The latter was a softer result that did much of the same.

On the chart below, we can see that the previous setup with the falling wedge bullish reversal pattern did not follow through as hoped. The upper line of the formation was left to represent resistance going forward. We have now also pushed below a key near-term support level around 0.92 which is the February 23rd low. Taking all of this into consideration, entering short now looks like a compelling argument.

However, at the time of this writing, prices are lower than the optimal entry point for a 2-to-1 risk-reward ratio. Thus, an entry will be placed to sell NZD/CAD at 0.9160 (green horizontal line on chart below). A stop will be placed on a daily close above 0.9200. The trade will target the 50% midpoint of the Fibonacci retracement at 0.9080. If the target will be met, all profits will be booked. If the fundamental landscape still looks appropriate for NZD/CAD afterwards, then we will look to re-enter short using a new setup. 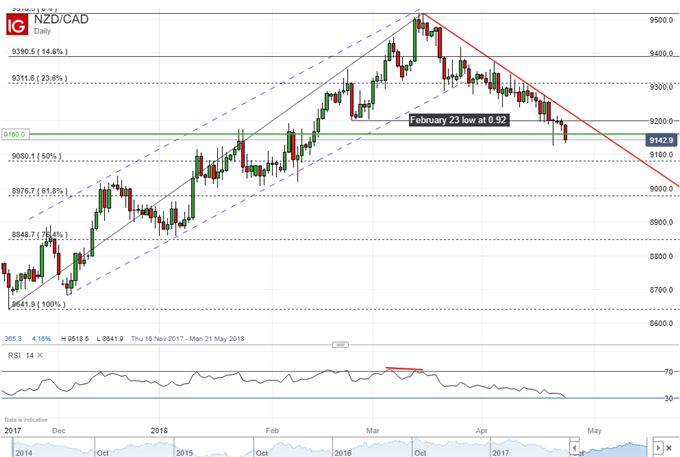