Blog - Latest News
You are here: Home / Analyst Picks / Elliott Wave Analysis for AUDUSD Looks for a Fall Below 76 Cents

Our 2018 AUD/USD forecast included a smooth start and rough finish. We were anticipating a mild break higher above 81 cents at the beginning of the year to finish off a large complex wave that began in September 2015. That mild break would put us on alert for a longer-term top and reversal.

After an important top was established in January, AUDUSD has begun a bearish impulsive wave that may retest 76 cents and possibly lower levels.

Two weeks ago, we argued that AUDUSD ended a three-year bullish wave and that bearish traders may take over the upper hand. In Monday’s Elliott Wave webinar, we dialed in more specific price zones to watch out for, namely a break below .7891 would trigger a short entry.

A small support shelf near .7892 was established over the past several days. Now that AUDUSD has pressed into the reversal zone, it is best to wait for support levels to break to indicate the market is ready to trade back into the direction of the bearish trend.

We will manually adjust the stop loss in our favor if the market moves favorably in our direction. 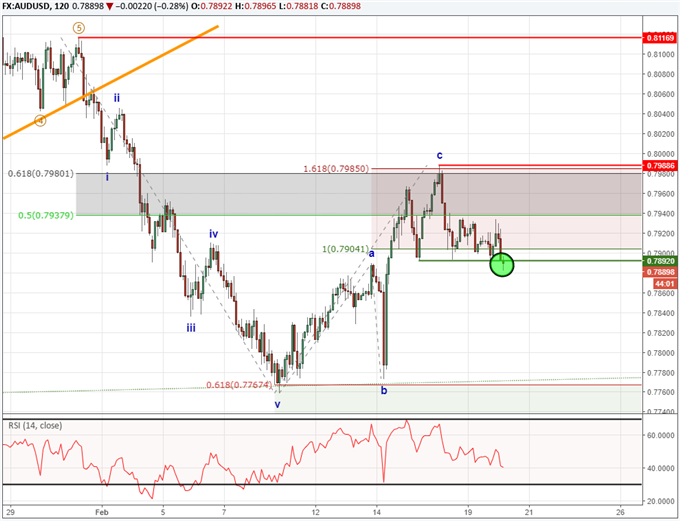 What is the Elliott Wave Theory?

Elliott Wave Theory is a forex trading stud that identifies the highs and lows of price movements on charts via wave patterns. Traders often analyze the 5-wave impulse sequence and 3-wave corrective sequence to help them trade forex strategically. We cover these wave sequences in our beginners and advanced Elliott Wave trading guides.

In Elliott Wave Theory, many times alternating waves have Fibonacci or equal proportion to one another. The downward wave from January 31 to February 9 needs an alternating wave to measure against. Therefore, if this market is successful in moving lower, an equal distance to the Jan 31 – Feb 9 wave projected from the February 16 high is at .7630. Since these are price zones and the market rarely stops at the exact levels, we look to a first target a few pips before the wave relationship.

New to FX trading? We created this guide just for you.

Bearish USD/CHF Off of Fibonacci Resistance
Scroll to top