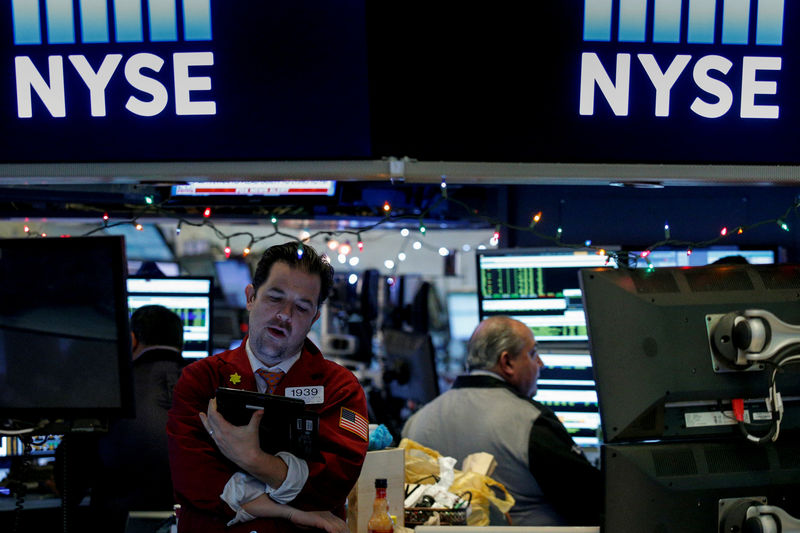 © Reuters. Top 5 things to watch this week in financial markets

Investing.com – Global financial markets will focus on this week’s Federal Reserve policy meeting, the first with Jerome Powell as chair.

A number of other closely watched meetings are also taking place this week, starting with the G20 summit in Buenos Aires on Monday.

The Bank of England and the Reserve Bank of New Zealand are due to hold monetary policy meetings later in the week.

Staying in the UK, Brexit developments look set to continue to dominate the news agenda ahead of a European Council summit at the end of the week.

Euro zone data on private sector growth will be closely watched amid speculation over how soon the European Central Bank will start to wind up its massive monetary stimulus program.

Ahead of the coming week, Investing.com has compiled a list of the five biggest events on the economic calendar that are most likely to affect the markets.

The Fed is expected to raise rates by a at the conclusion of its two-day policy meeting at 2:00PM ET (1900GMT) on Wednesday.

The banks rate statement will be closely watched for any indications as to the pace of monetary policy tightening for the remainder of the year.

In December the Fed forecast three rate hikes for 2018, but an upbeat assessment of the economy by Powell late last month fueled speculation that a fourth rate hike could be on the cards.

Investors will also be also watching for any signs of concern among policymakers over the prospects for a global trade war.

The BoE will announce its at 1200GMT (7:00AM ET) on Thursday and Governor Mark Carney will hold a press conference shortly after the announcement.

While no change is expected, the BoE could flag the possibility of a May rate hike if Monday’s report and Tuesday’s indicate that the economy is on a solid footing.

Brexit developments will also be in focus, as a two-day European Council summit begins on Thursday, with negotiators attempting to reach agreement on the transition period for the UK to leave the EU.

The euro zone is to publish preliminary data on and sector activity for March at 0900GMT (4:00AM ET) on Wednesday. Ahead of the euro zone PMI’s, and will release their own PMI reports.

The data will offer more information about whether or not a phase of increasing growth is over for now. Growth in the euro area’s private sector remains strong, but momentum eased slightly in February after a very strong start to the year.

The ECB dropped its easing bias from its rate statement earlier this month, fueling expectations that it is moving closer to normalizing monetary policy in the euro area.

ECB President Mario Draghi said that the solid economic recovery in the region had supported the decision to remove the easing bias.

The RBNZ’S monetary policy update is due at 2000GMT on Wednesday. Almost no one is expecting any change to the , but it will be the last meeting before Adrian Orr takes over as governor on March 27 from Grant Spencer.

Before Orr takes over a new Policy Target Agreement is expected to be unveiled and with a new government and RBNZ governor, the document is highly significant.

Details of the government’s plan to add employment to the RBNZ mandate alongside price stability will be watched closely.

Finance ministers and central bank governors from the world’s are set to meet in Buenos Aires starting on Monday, with the state of the global economy and risks to growth at the top of the agenda.

The subject of multilateral trade is likely to be a major topic of discussion after recent changes to U.S. trade policy created a growing sense of uncertainty and sparked fears over a trade war.

The regulation of cryptocurrencies is also likely to be in focus, following recent calls for discussions by finance officials from the U.S., Germany, France and Japan.

Stay up-to-date on all of this week’s economic events by visiting: http://www.investing.com/economic-calendar/