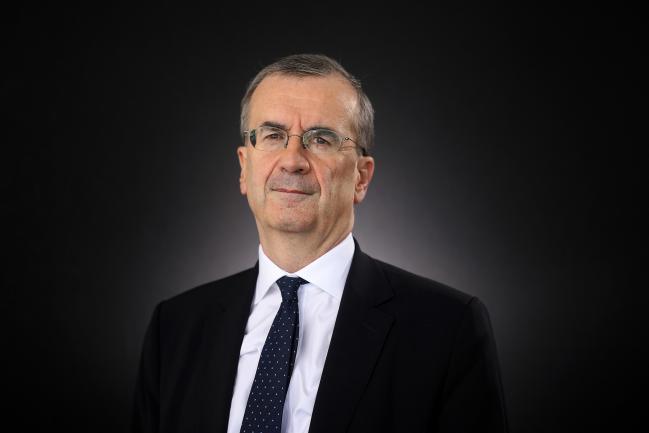 © Bloomberg. Francois Villeroy de Galhau, governor of the Bank of France, poses for a photograph following a Bloomberg Television interview at the World Economic Forum (WEF) in Davos, Switzerland.

In an interview in Paris, the French central banker played down concerns about the euro area’s first-quarter economic slowdown and signaled that the ECB is still likely to halt quantitative easing this year. He said inflation will resume its acceleration in coming months, with underlying price pressures set to strengthen as the bloc’s temporary weakness passes.

“We will probably give additional guidance for the end of the year for the timing of the rate hike and the contingencies,” Villeroy said in a Bloomberg TV interview with Francine Lacqua. “We’ll see exactly how we formulate it. We’re predictable, and it’s a clear virtue of our gradual normalization path, but we are not precommitted.”

ECB policy makers have yet to formally discuss the future of their QE program. Purchases are currently scheduled to run until at least September, totaling more than 2.5 trillion euros ($3 trillion), and officials expect interest rates to stay at current record lows until “well past” the end of net buying. Maturing debt will be reinvested.

The slow progress toward ending stimulus largely reflects muted consumer-price growth — a phenomenon that much of the industrialized world is experiencing. Speaking at the same event in Paris, Federal Reserve Bank of Cleveland President Loretta Mester said it was too soon to declare the U.S. central bank has reached its inflation goal “on a sustained basis.”

Villeroy, who sits on the decision-making Governing Council, kicked off a busy day of ECB appearances. Executive Board members Sabine Lautenschlaeger and Yves Mersch didn’t address monetary policy directly in their speeches, focusing on banking union and digital currencies.

Speaking in London, chief economist Peter Praet repeated a speech from a week earlier, where he reaffirmed confidence in the euro area’s upswing and said the ECB’s policy will evolve in a data-dependent and time-consistent manner. Benoit Coeure, who runs the institution’s market operations, is due to speak at 7:45 p.m in Geneva.

The French governor warned the risk of trade protectionism could have a detrimental effect on global growth and weigh on business confidence. He did praise one positive development: after concerns in the past year that the U.S. would deliberately seek a weak dollar, he sees no sign of currency wars.

(Updates with Praet in eighth paragraph.)

NZD/USD Could See Full Retracement Back to Nov Lows