Blog - Latest News
You are here: Home / latest_news / ECB Is Said to See Scope to Wait for July to Signal QE End 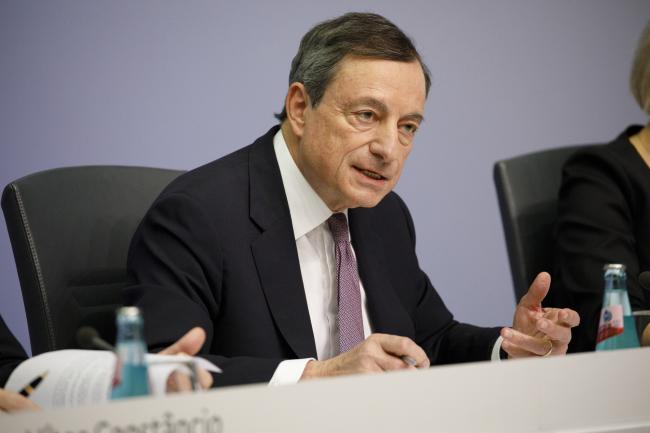 (Bloomberg) — European Central Bank policy makers see scope to wait until their July meeting to announce how they’ll end their bond-buying program, according to euro-area officials familiar with the matter.

Governing Council members want sufficient time to judge if the economy is overcoming its first-quarter slowdown, the officials said, asking not to be identified because the internal deliberations are confidential. That could mean the June meeting, which would have the advantage of linking the decision to updated economic forecasts, might be too soon.

Some governors don’t see any need to change the ECB’s guidance on interest rates at the same time, arguing that they can afford to wait to see how the market reacts to the announcement of an end-date for quantitative easing, though not everyone agrees. The officials said there have been no formal discussions at all on a strategy for rates.

An ECB spokesman declined to comment. The euro briefly dropped to the lowest level in two weeks, and was down 0.5 percent at $1.2280 at 5:05 p.m. Frankfurt time.

President Mario Draghi acknowledged the region’s slowdown on Friday in a statement at the International Monetary Fund meetings in Washington, but maintained his optimism that the expansion will continue.

“Notwithstanding the latest economic indicators, which suggest that the growth cycle may have peaked, the growth momentum is expected to continue,” he said.

He’ll hold a press conference on April 26 after the Governing Council next sets policy, though there are few expectations for any shift then. Economists surveyed by Bloomberg this week pushed out their estimates of when the council will take its next steps toward normalization. Just 36 percent predict a decision to end QE will be taken in June, down from almost half in last month’s poll. About a quarter of respondents foresee the announcement in July and a similar proportion forecast September.

The euro area posted its strongest economic expansion in a decade in 2017, but started this year with a slump in output and confidence that threatens to slow the central bank’s progress toward its inflation goal. Explanations range from bad weather and flu, which should fade away relatively quickly, to deeper concerns such as global trade conflicts that could damage growth.

Bundesbank President Jens Weidmann, who has repeatedly called on the ECB to communicate when it will end QE, said earlier on the sidelines of the IMF meetings that “what we certainly don’t see is an economic turning point.”

The ECB has pledged to buy 30 billion euros ($37 billion) a month of debt until at least September, taking holdings to 2.55 trillion euros. Economists in the survey predict a short taper — totaling 35 billion euros — in the final quarter to end the program.

The Governing Council also says it expects to keep interest rates at record lows until “well past” the end of net asset purchases, a vague phrasing that it recognizes will have to be clarified at some point. Investors and economists largely expect a first rate hike around the middle of 2019.

(Updates with euro, comment from Draghi starting in fourth paragraph.)