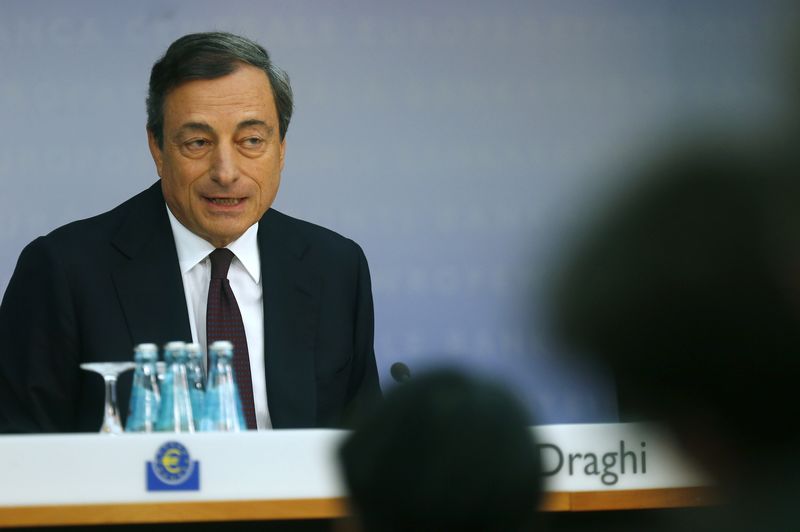 The currency bloc’s broadest economic expansion in its history is drawing workers back to the job market and spurring companies to invest to replace aging equipment. Governments — with varying degrees of reluctance — have even pushed some through reforms aimed at improving productivity.

The result is the 19-nation economy should now be able to grow at a faster rate than before without spurring inflation. Bloomberg Economics reckons the pace of so-called potential growth rose to 1.9 percent last year compared with 1.2 percent in 2016.

While that’s good news overall, it also means that for the ECB president and his colleagues self-sustaining inflation could be further off than previously thought. That justifies Draghi’s call for patience and persistence in delivering stimulus, suggesting bond-buying will be extended beyond September and interest rates won’t rise until well into 2019.

“If you can lift the cycle then this in the end — even without structural reforms — will probably lift the potential as well, because you bring people from unemployment, productivity increases, you start investing,” said Gilles Moec, chief European economist at Bank of America Merrill Lynch (NYSE:) in London and a former Bank of France economist. “Probably potential growth in the euro area is on its way up, but regardless of whether it’s true or not the ECB is taking the right attitude in terms of risk management.”

Potential growth is the rate at which the economy’s production capacity can expand over the long term. If it picks up, then actual output takes longer to reach that capacity. Draghi acknowledged the changing environment last week as he reiterated the need for patience and persistence with ECB stimulus.

“Even if slack is now receding, estimates of the size of the output gap have to be made with caution. Strong growth may be leading to higher potential output, as crisis-induced hysteresis may be reversed in conditions of stronger demand.”

The term “hysteresis” describes how developments in any system can become self-reinforcing. It was a favorite word of the ECB in the downturn when unemployment reached a record 12.1 percent and policy makers feared people would lose the skills needed to rejoin the labor force.

Today, it means the economy’s expansion is drawing in new workers such as women and the elderly who previously weren’t looking for jobs. ECB chief economist Peter Praet said last week that officials have been surprised by the response of labor to the upturn. There are 5 million fewer jobless people compared with 2013, yet almost 8 million jobs have been added in that period.

Governing Council member Jan Smets said this week that policy makers “suspect that slack is bigger than we thought.”

Capital investment has also recovered after years of downturn, with companies like Robert Bosch GmbH sinking money into two new plants to produce chips for cars and other internet-connected products. Labor productivity has improved and is projected to continue to rise.

In the shorter term, capacity constraints are taking their toll on economic activity. A measure of private-sector activity by IHS Markit slumped in March as companies reported supply-chain bottlenecks and shortages of skilled workers. While that signals healthy underlying demand that can be met with future investment and training, it also muddies the picture for the ECB.

The impact on slack will be a factor in upcoming policy decisions, officials familiar with the Governing Council’s discussions said, asking not to be named because the deliberations are confidential. The ECB currently estimates the potential growth rate at between 1.2 and 1.4 percent compared with 0.9 percent in 2011, according to one of the people. An ECB spokesman declined to comment.

If the economy can grow at a faster pace without overheating, policy makers get more room to leave monetary policy loose for now. It also means that when interest rates do start to rise, they’ll eventually settle at a higher level than would otherwise have been the case, giving central bankers more firepower come the next crisis.

The trend echoes the experience of other advanced economies, where unemployment has fallen to far lower levels than expected without generating significant price or wage pressures.

Bank of England Governor Mark Carney initially said in 2013 that he wouldn’t consider raising interest rates until joblessness fell to 7 percent. Unemployment is now at a four-decade low of 4.3 percent and a tightening cycle is only just getting under way — partly because Brexit uncertainty has since weakened potential growth.

The U.S. Federal Reserve this week raised rates for the sixth time since December 2015. Unemployment was 5 percent when it started and has since dropped to 4.1 percent, the lowest since 2000.

“Everything suggests that the wage recovery that is needed to support underlying inflation over the medium term will likely be slower than in previous recoveries,” said Fabio Fois, an economist at Barclays (LON:) in Milan. “Caution is needed.”

Trump’s Tariffs May Be Playing Into Xi’s Hands: Michael Schuman