FOREX: The US dollar index edged lower on Friday (-0.17%), extending losses from Thursday on the back of disappointing US inflation data. Dollar/yen was down 0.09%, with little in the way of news or developments to guide price action. Euro/dollar inched up to 1.1943 (+0.24%), while pound/dollar touched 1.3570 (+0.39%), with the latter licking its wounds following a sharp decline on Thursday, after the Bank of England appeared cautious about near-term rate increases. In the antipodean sphere, aussie/dollar reached a one-week high of 0.7556 (+0.33%). Meanwhile, kiwi/dollar ticked up to 0.6978 (+0.26%), recovering nearly all the losses it posted earlier in the week, after the RBNZ poured cold water on expectations for any rate hikes this year. Finally, dollar/loonie fell to 1.2739 (-0.21%), as Canadian traders awaited the release of the nation’s employment data for April at 1230 GMT.

STOCKS: European equities were a sea of red on Friday, with Spain’s blue chip index being the only exception. The pan-European STOXX 600 and the blue-chip Euro STOXX 50 were down by 0.10% and 0.28% respectively, dragged lower mainly by the healthcare and utilities sectors. In Germany, the DAX retreated by 0.34%, while the French CAC 40 fell 0.40%. In Italy, the FTSE MIB 100 was down by 0.05%, as talks between the anti-establishment Five Star Movement and the far-right League on forming a government appeared close to bearing fruit. The British FTSE 100 was practically flat on the day (-0.01%), while the only major index in the green was the Spanish IBEX 35 (+0.11%). Turning to the US, futures tracking the Dow Jones, S&P 500, and Nasdaq 100 were all in positive territory, pointing to a higher open today.

COMMODITIES: Oil prices edged up during the European trading session Friday, paring earlier losses and remaining elevated near the multi-year highs reached earlier in the week. WTI was up by 0.30%, but Brent crude was lagging behind, rising only 0.03%. Market participants were still assessing the potential impact of US sanctions against Iran in the oil market, and whether or not other major producers like Saudi Arabia would raise their production to “fill the gap” left behind by Iranian supply taken off the market. Technically, it will be crucial to see if prices can post a higher high. Looking at WTI, it is currently trading near $71.50, just below the three-and-a-half year high of $71.89 recorded on Wednesday. In precious metals, gold prices were up by 0.26%, trading close to the $1,325 per ounce level. Without any major headlines driving price action, the metal’s gains appear to be owed to the correction lower in the dollar. 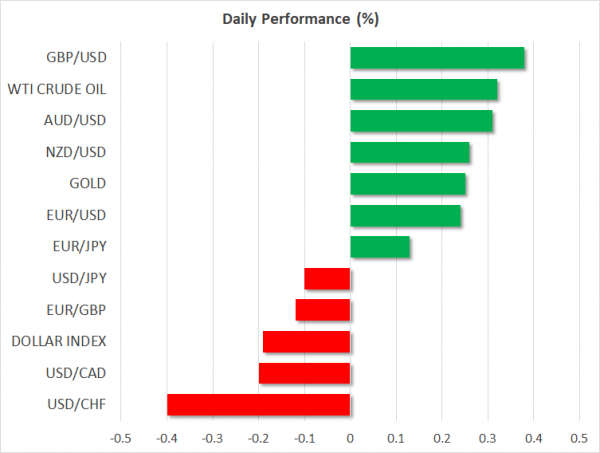 Friday is a relatively quiet day in terms of data releases, with the US and Canada being the only ones set to submit reports giving clues on economic trends.

Canada will see the release of its own employment data for April at 1230 GMT. The unemployment rate is forecast to have held steady at 5.8%, creating a near-decade low, while the employment change is forecast to have risen by 17.4k versus 32.3k in the prior month. An upward surprise in these data and a potential continuation of the rally in oil prices could drive the loonie even higher.

Shifting to the US, at 1400 GMT, the University of Michigan will deliver preliminary readings on consumer sentiment and inflation expectations for the month of May. Estimates on consumer sentiment are forecasting that the index might inch down to 98.5 compared to 98.8 in the previous month, while the survey related to inflation expectations will attract interest after the US CPI announcement on Thursday. Also, at the same time, US import and export prices for April will be announced.

In energy markets, investors will keep a close eye on the US oil rig count issued by the Baker Hughes company at 1700 GMT. Potential increases in active drilling rigs may trigger some losses in oil prices after they reached a new three-and-a-half year high.

In terms of public appearances, at 1230 GMT, Fed President James Bullard will be giving a presentation on the US economy and monetary policy, while at 1315 GMT, ECB President Mario Draghi will deliver a speech in Italy. Another policymaker delivering remarks today is Bank of Canada Deputy Governor Carolyn Wilkins (1310 GMT).

US Stocks On Course For Perfect Week

DAX Retracts After Punching Past 13,000
Scroll to top