When Gary Cohn’s resignation hit the news wires Tuesday night, the sold off aggressively against all of the major currencies but there was virtually zero follow through during the NY trading session. Instead, the dollar rebounded as U.S. stocks failed to “crash” as many anticipated. It took more than half a trading session before the managed to fall 1% and even then, refused to follow as it spent most of the day hovering around 106. Toward the end of the NY session, stocks extended their intraday recovery after the White House announced that the tariffs will be signed by the end of the week (possibly tomorrow) but there could be exemptions for Mexico and Canada on the basis of national security. While we believe that Gary Cohn’s resignation is important because it has significant consequences for market sentiment and policy, investors are hoping that the tariffs won’t be as severe as initially advertised. Nonetheless, Cohn is a major loss – as one of President Trump’s top economic advisors and a key architect of the tax reform, his stable influence provided Wall Street with reassurance that it desperately needed. His decision to resign leaves the Trump Administration with advisers who favor protectionism and strong trade penalties. We continue to believe that trade tensions will worsen before they improve, preventing any meaningful dollar rally. The slightly more positive report was no surprise as U.S. policymakers prepare for a in March. According to ADP, accelerated in February.

Meanwhile, after rising for 4 straight days, pared its gains ahead of Thursday’s European Central Bank . The ECB is widely expected to leave monetary policy unchanged but among all of this week’s rate decisions, theirs could be the most market moving. Policymakers have been very clear that sometime this year, their guidance will change and the only question is how quickly they will start talking about unwinding Quantitative Easing and raising interest rates. Early on, some investors had thought that this would occur at the March meeting but last week there were reports that they could hold off until the summer. Taking a look at the table below, data is one of the clear motivations as there’s been a broad-based slowdown in the Eurozone economy since January.

Yet it is important to realize that many of these indicators are retreating from very strong levels. The Eurozone economy is still performing well, stocks are off their highs, Italy’s election may have led to a political stalemate but in Germany, Angela Merkel has won the right to form a coalition government with the Social Democrats, ending months of political uncertainty. The is strong but hasn’t appreciated further than its end-of-January levels. When the ECB last met, President Draghi acknowledged the euro’s rise by warning that euro volatility creates uncertainty but then spent the majority of his press conference talking about the solid and broad-based momentum in the economy and the prospect of higher growth surprises that could lift over the medium term. We don’t expect these views to change at this week’s meeting and given the market’s desire to sell , ECB optimism could drive EUR/USD back to 1.25. Should sound more cautious, we could see a nasty reversal in EUR/USD as speculators are clearly leaning toward optimism. 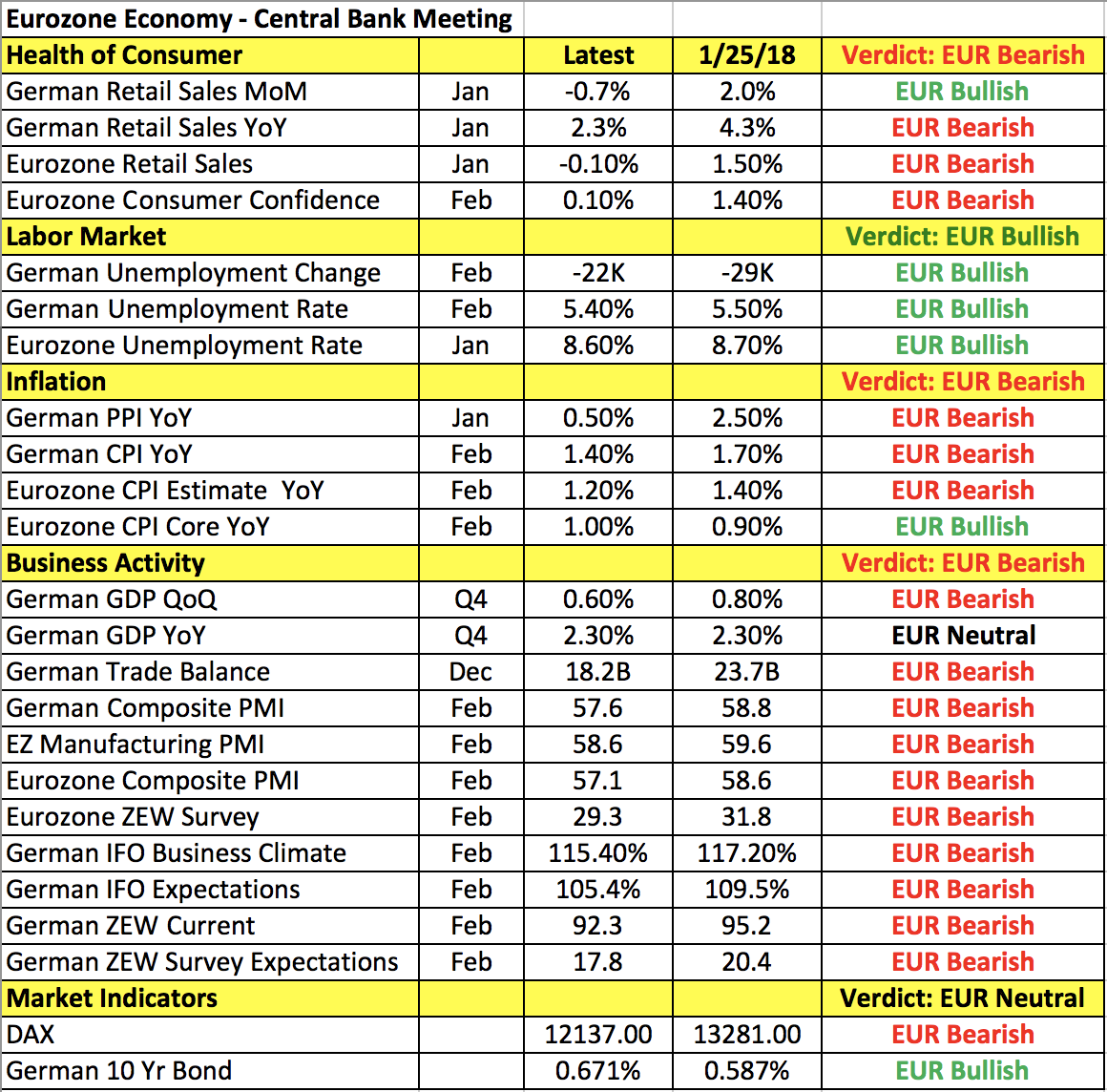 All 3 of the commodity currencies ended the day lower against the greenback with the leading the losses. The Bank of Canada left unchanged, which was in line with expectations but their policy contained a more cautious tone than most had anticipated. The BoC saw trade as a growing source of uncertainty an expressed concern about lower wage and house hold credit growth and said they need to fully assess the impact of new housing measures. As a result of these setbacks, they want to monitor the economy’s sensitivity to higher interest rates and reiterated the need for continued accommodation as they watch incoming data. USD/CAD traded as high as 1.30 on the back of the rate decision but even on its third try, failed to break this key level. Part of that resistance had to do with the White House’s announcement of potential tariff carve-outs for Canada and Mexico.

Softer-than-expected Australian growth prevented from extending Tuesday’s gains. The followed the other commodity currencies lower despite an uptick in house prices. Trade numbers were due from and Wednesday evening. Chinese data is subject to New Year distortions but a rebound in trade activity is expected in Australia after last month’s surprisingly weak report. Lastly, sterling ended day the unchanged against the and . The latest report was right in line with expectations and there’s been absolutely no progress on Brexit negotiations.