FOREX: Dollar/yen managed to pick up speed, rising to 105.84 (+0.49%) despite worries that tensions between the US and China could escalate again. The rise came after Trump tweeted that the meeting between the North Korean and the Chinese leaders “went very well” and that the former was “looking forward” to meet Trump. The dollar index, which gauges the greenback’s strength versus six major currencies was also up, standing at 89.51 (+0.16%) as the euro and the pound remained flat near intra-day lows. Euro/dollar was unable to recover in the absence of catalysts, trading at 1.2393 (-0.07%), while pound/dollar gave up earlier gains, falling to 1.4150 (-0.03%) as investors were waiting to hear today what the government’s solutions are to avoid a hard-Irish border. Worse-than-expected CBI readings which track trends in British retail and wholesale sectors weighed further on the currency. In antipodean currencies, aussie/dollar and kiwi/dollar were weak at 0.7666 (-0.14%) and 0.7251 (-0.21%) respectively. Dollar/loonie was last seen at 1.2888 (+0.05%).

STOCKS: European stocks were dragged lower during early European afternoon, led by losses in technology companies, as fears over further regulations in the sector following Facebook’s scandal kept investors cautious. The pan-European STOXX 600 and the blue-chip Euro STOXX 50 were down by 0.94% and 0.87% respectively. The German DAX 30 dived by 1.27%, with all sectors being in the red apart from consumer non-cyclicals. The French CAC 40 lost 1.18%, the Italian FTSE MIB retreated by 1.0% while the UK’s FTSE 100 dropped by 0.71%. Asian equities closed weaker, while the US stock future indices were pointing to a negative open.

COMMODITIES: Oil prices consolidated near five-day lows after the API weekly report indicated late on Tuesday an unexpectedly large increase in US crude oil stocks. WTI crude and the London-based Brent were last seen at $64.61 (-0.98%) and $69.71 (-0.57%) per barrel respectively. In precious metals, gold extended its drop towards $1,339.78 (-0.34%) as the dollar was on the recovery. 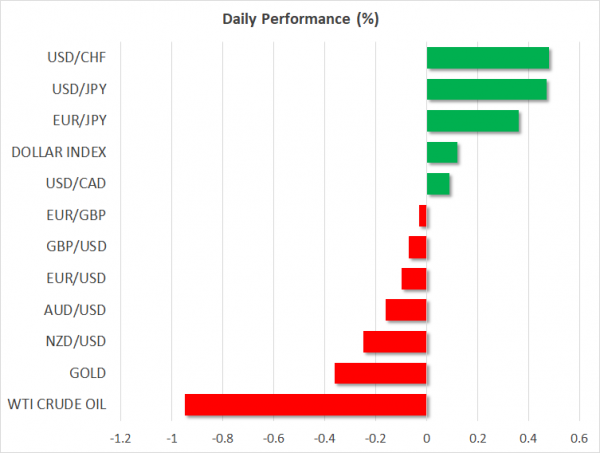 Day ahead: Trade and Brexit headlines could dominate US data

In the remainder of the day, the dollar will remain under the spotlight as investors wait to see whether Trump’s trade threats will expand even further, while a number of economic releases due out of the US later today could bring some volatility to the currency. The pound will also be in focus as the Bank of England is scheduled to give some guidance on preparation for Brexit to banks and other financial businesses at 1200 GMT, while the Times newspaper said that the government plans to give new proposals to Irish officials on how to avoid a hard post-Brexit border.

At 1330 GMT, the Commerce Department will publish final US GDP growth readings for the fourth quarter of 2017, with analysts predicting that the rate of expansion has increased to 2.7% y/y compared to 2.5% estimated previously. The GDP inflation component – the GDP deflator – could give some additional insight on price growth ahead of February’s core PCE price index due for release tomorrow. In a separate report, pending home sales for the month of February could attract some attention as the measure is expected to rebound by 2.1% m/m after tumbling by 4.7% in January, posting the largest decline in four years.

Still, any discouraging news on the trade story could offset any potential gains arising from the data. Yesterday, while markets were optimistic that the US and China could find a common ground on the trade front, fears of a dispute were rekindled by talk that US President, Donald Trump, German Chancellor, Angela Merkel and French President, Emanuel Macron, were discussing on how to join forces to counter Chinese trade practices. If the US persists in stricter restrictions against China despite US and Chinese officials showing recently willingness to beging negotiations, and if Germany and France back this view, then equity and forex markets could face further negative pressures.

In energy markets, the Energy Information Administration will publish its weekly report on US oil inventories. Yesterday the American Petroleum Institute indicated an unexpected sharp increase in US crude oil inventories for the week ending March 23, therefore it would be interesting to see whether the EIA figures will disappoint investors as well by also showing a larger-than-expected inventory build.

As for notable speakers, we will hear from Atlanta Fed President Raphael Bostic (voter) at 1530 GMT.

Canadian Dollar Subdued Ahead of US GDP
Scroll to top