FOREX: The dollar extended its declines from yesterday on Thursday, touching its lowest in nearly two weeks versus a basket of currencies. FOMC policymakers’ decision to continue signaling three hikes in total for 2018 was seen as the catalyst behind the US currency’s decline.

STOCKS: US markets closed a little lower yesterday in the aftermath of the Fed decision, as the upward revision in the rate projections for 2019 and 2020 raised concerns that this tightening cycle would last longer than previously anticipated. The Nasdaq Composite dropped by 0.3%, while both the S&P 500 and the Dow Jones closed 0.2% lower. Moreover, futures tracking the Dow, S&P, and Nasdaq 100 are all well-into negative territory, pointing to a lower open today, possibly due to reports the US will unveil new tariffs against China today. In Asia, Japan’s Nikkei 225 and Topix indices gained 1.0% and 0.65% respectively on their first day back from a public holiday, but in Hong Kong, the Hang Seng was down by more than 0.9%. In Europe, futures tracking all the major indices are currently flashing red.

COMMODITIES: Oil prices traded somewhat lower today, with WTI and Brent crude being 0.1% and 0.2% lower respectively, both benchmarks giving back some of the notable gains they posted yesterday. Both WTI and Brent rose to levels last seen in early February on Wednesday, after the weekly EIA crude inventory data surprisingly showed a drawdown in stockpiles, signaling that US demand remains healthy. The decline in the US dollar was also positive for oil prices yesterday. In precious metals, gold surged yesterday on the back of a declining greenback, reaching its highest level since early March. A weaker US currency makes the dollar-denominated metal appear more appealing for investors using foreign currencies. 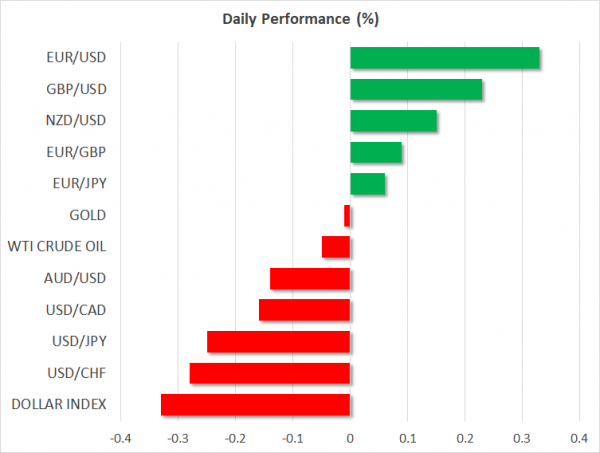 The dollar’s index against a basket of currencies traded 0.35% lower at 89.47, after losing 0.65% on Wednesday. Earlier on Thursday, the index touched 89.45 at its lowest, a level last tested on March 8. The fall in the dollar came after FOMC members continued to project three interest rate hikes in total for 2018 upon completion of the Fed’s meeting on monetary policy on Wednesday. In an environment of rising expectations for four hikes, this was viewed as dollar-negative for market participants who in turn sold off the greenback. Meanwhile, as widely expected, the Fed did raise rates yesterday for the Fed funds rate to enter a target band between 1.50-1.75%.

Interestingly, the dollar was not supported by Fed policymakers’ decision to revise upwards their expectations of the number of hikes for 2019 and 2020 on the back of an improving economic outlook according to their view.

Indicative of dollar weakness, the yen, euro and sterling were all building on yesterday’s notable gains. At 0732 GMT, dollar/yen was down by 0.25% at 105.74, around a yen below Wednesday’s one-week high, while it also recorded a two-week low of 105.55. Euro/dollar was up by 0.35% at 1.2379, recording an eight-day high of 1.2388 previously. Pound/dollar traded higher by 0.25% at 1.4173, close to the one-and-a-half-month high of 1.4177 posted earlier in the day; sterling will be in focus later on Thursday as the Bank of England will be completing its meeting on monetary policy.

Commodity-linked currencies, including the loonie, aussie and the kiwi, which took a beating recently on the back of concerns over global trade, also recorded hefty gains versus the US currency overnight. On Thursday, dollar/loonie traded lower by 0.15% and not far above a nine-day low of 1.2873 hit earlier in the day. Aussie/dollar was 0.15% down after previously posting a six-day high of 0.7783, while kiwi/dollar was up by 0.15%. Australia has strong economic ties with China and an anticipated US tariff announcement on Chinese imports later on Thursday likely weighed on the currency. Meanwhile, data on Australian employment growth were relatively strong – the unemployment rate did rise but that was due to more individuals entering the labor force – while the Reserve Bank of New Zealand held rates steady at the record low of 1.75% as it completed its meeting on monetary policy, providing very few fresh signals on policy.

In emerging markets, dollar/yuan hit a one-week low of 6.3020. The Chinese currency benefitted from the overall weaker greenback but also a firmer fixing of the exchange rate by the PBOC which also proceeded with raising a key short-term interest rate on Thursday. 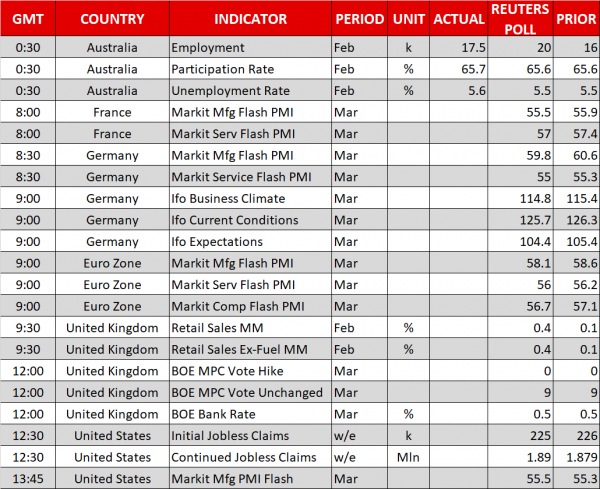 Day ahead: BoE decides on interest rates, while US prepares to unveil new tariffs

Today, sterling traders will likely focus on the Bank of England’s (BoE) rate decision at 1200 GMT. No change in policy is expected, and since this is one of the ‘smaller’ gatherings without a press conference, investors will probably scrutinize the accompanying statement and the meeting minutes for updated signals on policy. Specifically, for any hints regarding the likelihood of a rate hike at the May meeting, something markets seem to consider very probable judging by the 70% implied probability for such action, according to the UK overnight index swaps.

Any signs suggesting as much – for instance an optimistic assessment of the latest acceleration in wages – could push the May probability higher, alongside the British pound. Conversely, a more cautious stance by the Bank that downplays the likelihood for a near-term hike could spell bad news for sterling. The vote count will also be important. It is forecast to be a unanimous 9-0 for staying on hold, but if some of the more hawkish members like Ian McCafferty dissent and vote for a hike, the pound could rally immediately on the news. The nation’s retail sales for February are also due out a few hours ahead of the decision, at 0930 GMT.

Those will not be the only events for the pound though, as the two-day EU summit will also commence today. A transitional Brexit deal has already been largely agreed, and it is simply expected to be formalized at this meeting. Still, many of the details of that deal have not been publicized yet, and the specifics could prove cause for volatility in the pound, as can any comments from the various officials at the summit.

Elsewhere, the ‘trade war’ narrative is about to get a new chapter, as media reports suggest the Trump administration will unveil new tariffs against Chinese goods as early as today. Besides the details of these tariffs, what will be equally important is the response from Chinese authorities. China noted that it will retaliate in kind to any US tariffs, to which US Trade Representative Robert Lighthizer responded that any Chinese retaliation will be met with new US measures, further amplifying concerns of a tit-for-tat escalation. In case the risk of a trade war increases further, the most vulnerable G10 currencies appear to be the aussie and the kiwi, given that the economies of Australia and New Zealand are highly reliant on commodity exports. Stock indices would probably take a serious hit as well, particularly Japanese benchmarks like the Nikkei 225. Meanwhile, safe havens such as the yen and the Swiss franc could extend their gains.

As for economic data, eurozone’s preliminary Markit manufacturing and services PMIs for March will be in focus at 0900 GMT. Expectations are for these indices to decline somewhat, but to still remain safely above the critical 50 barrier, signaling continued expansion in those sectors. In Germany, the Ifo survey for March is due out at 0900 GMT as well, with forecasts pointing to a decline in both the current conditions and the expectations indices.

In the US, the preliminary Markit manufacturing PMI for March and initial jobless claims for the week ended March 16 are due for release.

In equities, Nike will be among companies releasing quarterly results on Thursday.

Finally, in terms of speakers, we will hear from Norges Bank Governor Oystein Olsen at 1615 GMT, as well as BoE Deputy Governor Dave Ramsden, at 1700 GMT. Bank of Canada Deputy Governor Carolyn Wilkins is also due to deliver remarks, at 1845 GMT. 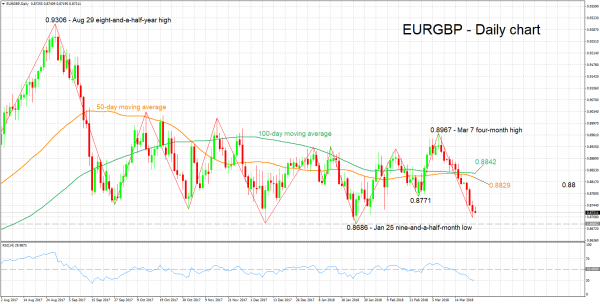 EURGBP has experienced considerable declines in recent weeks. Specifically, the pair has retreated in all but three of the twelve trading days that followed after it recorded a four-month high of 0.8967 on March 7, while on Wednesday it touched a two-month low of 0.8706. The RSI is declining, pointing to a negative short-term picture; notice also that the indicator has just marginally crossed below the 30 oversold level.

A hawkish stance by the Bank of England later today is likely to see the pair extending its declines. Initial support in this case might come around yesterday’s low of 0.8706, with a downside violation turning the focus to the nine-and-a-half-month low of 0.8686 recorded in late January, and even steeper declines shifting the attention to the 0.86 handle that may hold psychological importance.

A cautious tone by the central bank on the other hand, could see the pair advancing. The range around a previous bottom at 0.8771, which also encapsulates the 0.88 round figure and was congested recently, might offer resistance in the event of gains. A barrier to stronger bullish movement could come around the 50- and 100-day moving average lines at 0.8829 and 0.8842 respectively.