FOREX: The dollar traded down by less than 0.2% against a basket of currencies on Wednesday, though it held most of the gains made yesterday which saw it rise to a three-week high.

STOCKS: US markets closed in the green on Tuesday, recovering some of their losses from earlier this week. The Dow Jones led the way higher, gaining nearly 0.5%, while the Nasdaq Composite and the S&P 500 rose by 0.3% and 0.15% respectively. The direction of these indices today will probably be decided by the signals the FOMC sends. A hawkish revision in the Fed’s projected rate path, the so-called “dots”, could spell bad news for US equity indices, whereas an unchanged guidance that continues to signal three rate hikes this year may boost these benchmarks. Futures tracking the Dow, S&P, and Nasdaq 100 are all close to neutral territory. In Asia, Japanese markets were closed for a public holiday today, while in Hong Kong, the Hang Seng was down by 0.2%. In Europe, futures tracking all the major indices are flashing green, except for the UK’s FTSE 100.

COMMODITIES: In oil markets, WTI and Brent crude climbed by 0.1%, both benchmarks extending the gains they posted yesterday on the back of speculation the US could impose fresh sanctions on Iran and remove a significant chunk of oil supply from the market. Today, attention will fall on the weekly EIA crude inventory data, due out at 1430 GMT. In precious metals, gold traded 0.3% higher, without any major fundamental catalyst behind the move higher. Given that both oil and gold are denominated in US dollars, they are also likely to react to the FOMC decision later today. A weaker dollar on the back of a “cautious” Fed could see these commodities gain, whereas a stronger greenback could cause them to record some losses. 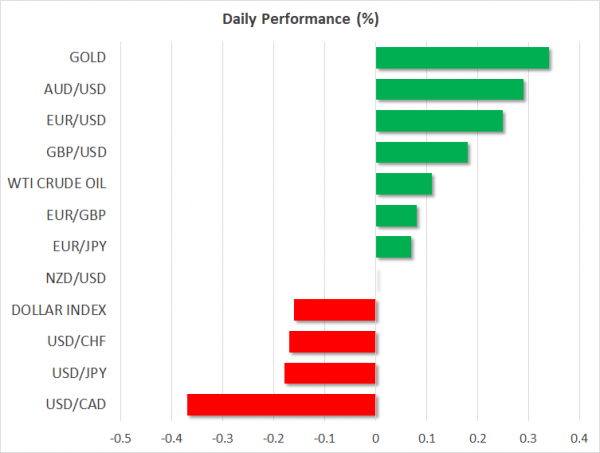 The dollar index was down by slightly less than 0.2% at 90.21. Still, this was not far below Tuesday’s three-week high of 90.45 and the index maintained most of the previous day’s gains that saw it add 0.7%. The focus is now firmly on the Federal Reserve meeting which will conclude later today. The delivery of a 25 bps rate hike is seen as a done deal, with investors paying attention to the central bank’s forward guidance. The big question is whether the Fed will signal four interest rate increases in total for 2018 or stick to the three that are currently priced in by markets and were last projected by FOMC policymakers.

Rising US Treasury yields in both the short- and long-end of the curve are perhaps indicative that markets are expecting a more hawkish tilt by the Fed. It is notable that the two-year yield and the five-year yield recorded a nine-and-a-half year high and an eight-year high of around 2.35% and 2.70% respectively on Tuesday.

Dollar/yen was 0.2% down at 106.33, still holding most of Tuesday’s gains and standing more than a yen above the 16-month low of 105.23 recorded in early March; markets were closed today in Japan for a public holiday.

Euro/dollar traded higher by 0.25% at 1.2275, after losing 0.8% the previous day and recording a three-week low of 1.2237. The tumble in the March ZEW economic sentiment survey for the eurozone and Germany, the euro area’s largest economy, contributed to the common currency’s decline on Tuesday. Concerns over escalating trade tensions were seen as the reason for the worsening sentiment. Elsewhere, pound/dollar was up by 0.2% at 1.4025, roughly making up for yesterday’s retreat which came on the back of softening inflation readings ahead of the Bank of England’s monetary policy meeting on Thursday.

The loonie which has been on the defensive for weeks in large part due to rising speculation the US would walk out of NAFTA, received a boost this time around after reports indicated that the US dropped a contentious auto-related demand that acted as a “thorn” in discussions, thus bringing the various parties involved closer to an agreement. Dollar/loonie was 0.4% down at 1.3020. This compares to Monday’s nine-month high of 1.3124 for the pair. The Mexican peso also benefitted on the news; Mexico is one of the three countries that are part of NAFTA.

The aussie posted some gains versus its US counterpart, rising by 0.3% to trade marginally above the $0.78 handle. The currency has been coming under pressure lately on the back of worries related to global trade, recording a three-month low of 0.7676 yesterday. US President Donald Trump is anticipated to unveil new tariffs amounting to tens of billions of dollars on Chinese imports by Friday. Australia is a major commodity-exporter and tit-for-tat retaliatory actions by China that could further escalate tensions have the capacity to act as a drag on its economy. The also commodity-linked kiwi was flat, trading close to $0.7180 and around one-and-a-half-month low levels.

Day ahead: All eyes on the Fed; RBNZ rate decision and UK jobs data also on the agenda

Today, the main event will be the FOMC rate decision at 1800 GMT. A 25bps rate hike is fully priced in already and as such, markets are likely to focus more on the updated rate path projections, also known as the “dot plot”, as well as Jerome Powell’s maiden press conference as Fed Chair at 1830 GMT. The updated forecasts for the US economy could also attract some attention.

The reaction in the US dollar is likely to be dictated mainly by the distribution of the so-called “dots”, namely whether the median dot will be revised higher to signal a total of four rate hikes this year, or whether it will remain unchanged at three hikes. Interestingly, investors have currently priced in exactly three quarter-point hikes this year. If the median dot is pushed up, the greenback may rally as speculation for a fourth hike heightens, but if it’s left unrevised, the prospect of a third hike could come into doubt and the currency may post some losses. On balance, an unchanged signal for three hikes appears slightly more likely, considering that the latest US inflation and wage data suggest there is little pressure on the Fed to act aggressively, for now. Not to mention that growth forecasts for Q1 2018 have consistently been revised lower lately, on the back of soft data.

Finally, Powell’s first press conference as Chair will also be critical for the dollar’s direction. Investors will likely focus on the Q&A session for any insights into his views – for instance how a Fed under his guidance would react to an unforeseen shock in markets or the economy.

In New Zealand, the RBNZ will announce its own policy decision two hours after the Fed, at 2000 GMT. Policymakers are widely expected to stand pat, and given the lack of major developments recently, this meeting is largely viewed as a “non-event”. Nonetheless, it will be interesting to see if officials appear worried with the recent escalation in trade rhetoric, given that New Zealand is an export-heavy economy. Any concerned signals in this regard could push the kiwi even lower.

As for economic data, the most noteworthy release will be the UK employment and wage numbers for February at 0930 GMT. The unemployment rate is projected to hold steady at 4.4%, while average weekly earnings are anticipated to have accelerated a little. If wages indeed pick up speed, that could increase the likelihood for a rate hike in May by the BoE and thereby, bring the pound under renewed buying interest.

In the US, the current account balance for Q4 and existing home sales for February are due out at 1230 GMT, but these may be overshadowed by the FOMC gathering later in the day.

In energy markets, the weekly EIA crude inventory data at 1430 GMT are anticipated to show another build in inventories, albeit a smaller one than previously. Besides the EIA figures, attention remains on the visit of the Saudi Crown Prince to the US. His presence there has raised speculation that a fresh round of sanctions on Iran may be looming, a factor that has pushed oil prices higher recently. 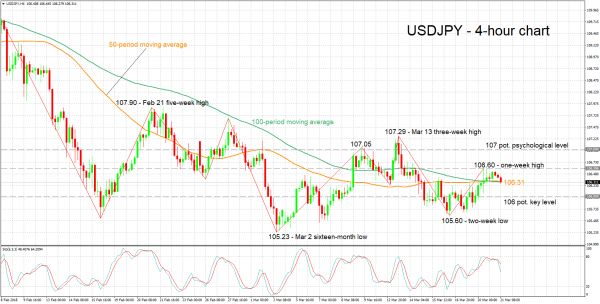 USDJPY has retreated a bit from the one-week high of 106.60 recorded on Tuesday. A bearish signal is given by the stochastics in the very short-term: the %K line has crossed below the slow %D one and both lines are heading lower.

Upbeat views by Fed policymakers on the state of the US economy later today are likely to support the pair. Resistance to up movements could come around yesterday’s one week high of 106.60, with stronger bullish action turning the attention to the area around the 107 handle, which was congested recently and also encapsulates a couple of peaks from the recent past.

Conversely, should the Fed express cautiousness about the outlook of the economy, the pair might head lower. Support could be taking place at the moment around the 50- and 100- period moving average lines which have converged at 106.31. A downside violation would shift the focus to the range around the 106 level, a congested area in previous sessions, while a previous bottom at 105.60 might also act as support in case of steeper declines.

Other releases out of the US – for example existing home sales – also have the capacity to spur movements in the pair during today’s trading.