The Federal Reserve has lifted interest rates to their highest level since the financial crisis, but Dollar bulls are clearly unamused.

Although on Wednesday, as widely expected, US interest rates were raised by 0.25% to a new band of 1.5%-1.75%, investors were more concerned with the dot-plot and Powell’s press conference. While the policy statement was generally positive and US economic growth was revised higher for 2018 and 2019, a crucial ingredient for hawks was missing. There is a suspicion that the Fed heavily disappointed markets by leaving the dot-plot unchanged for 2018 at a grand total of three hikes. Although there was a small upgrade to the dot-plot forecast for 2019 and 2020, this did little to support King Dollar. Jerome Powell’s noticeable caution during his conference and statement on how there was no clear indication in data of an accelerating inflation, encouraged investors to attack the Dollar further.

Taking a look at the technical picture, the Dollar Index was vulnerable to heavy losses after the Federal Reserve turned out to be less hawkish than anticipated. The breakdown below 90.00 could invite a decline towards 89.50 and 89.00, respectively.

Sterling higher ahead of BoE

The main event risk for Sterling today will be the Bank of England monetary policy decision, which is widely expected to conclude with interest rates left unchanged at 0.5%.

Investors will direct their attention towards the language of the statement for any fresh insights about potential timings of a change in UK interest rates this year. A sense of optimism over the Brexit transition deal, coupled with the fact that wage growth accelerated at the fastest pace in over two years, has boosted speculation of a rate hike in May. Sterling could receive a further boost if BoE policymakers mirror these expectations by adopting a hawkish stance and signalling a rate hike in May.

Focusing on the technical perspective, the GBPUSD extended gains on Thursday with prices hitting a fresh one-month high at 1.4170 as of writing. The combination of Dollar weakness following Wednesday’s dot-plot disappointment and Sterling strength has brought GBPUSD bulls back into the game. A breach above 1.4180 could encourage an appreciation towards 1.4260 and 1.4300. 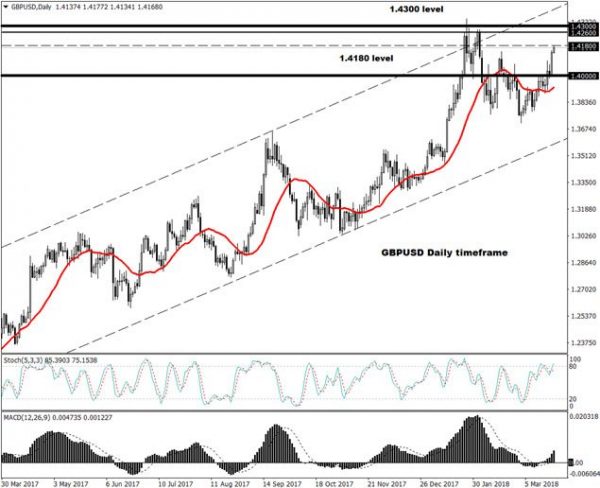 It’s remarkable how Gold prices soared on Wednesday despite the Federal Reserve raising interest rates. The reason behind Gold’s incredible rebound could be linked to the fact the Federal Reserve was less hawkish than anticipated, which simply weakened the Dollar. With the Dollar tumbling after the US Federal Reserve disappointed investors, Gold found itself back in fashion. The yellow metal could build on the current upside momentum, if political uncertainty in Washington and lingering trade war fears support the flight to safety. From a technical standpoint, Gold has broken above the $1330 resistance level. Previous resistance at $1330 could transform into a dynamic support that encourages an incline higher towards $1340. Alternatively, a failure for bulls to keep above $1330 could invite a decline back towards $1314. 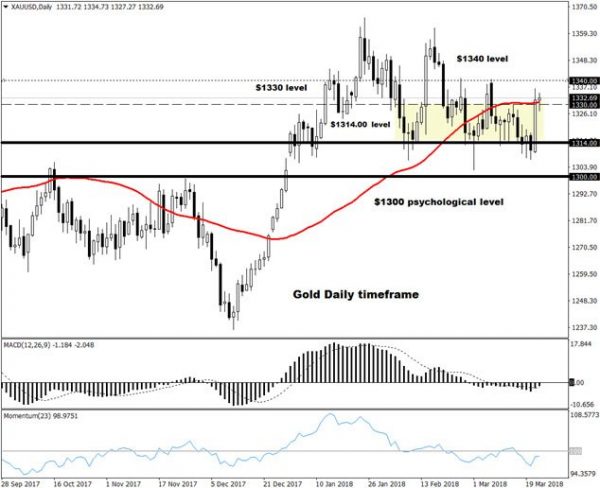 Dollar Extends Declines As FOMC Sticks To 3 Hikes, BoE And US Tariffs Decision...
Scroll to top