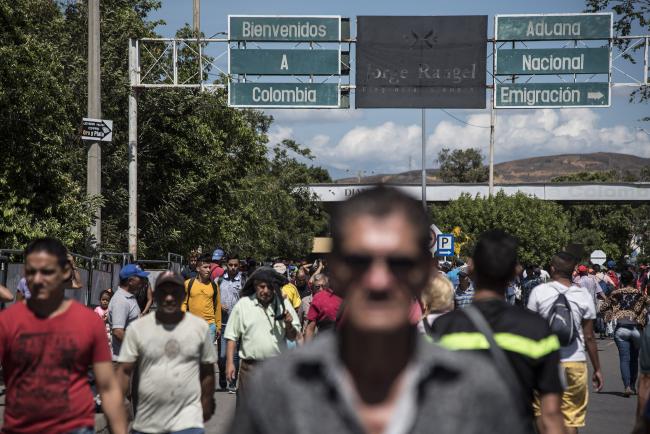 © Bloomberg. Venezuelans walk across the Simon Bolivar International Bridge towards Cucuta, Colombia, from San Antonio del Tachira, Venezuela, on Tuesday, Sept. 19, 2017. For weeks, Venezuelans have been flocking by the busload to San Antonio del Tachira, a border town of some 62,000 residents, fleeing as President Nicolas Maduro consolidates autocratic power. According to Colombia’s migration authority, the number of foreigners entering Cucuta, the first major city across the bridge, more than doubled this summer. Photographer: Carlos Becerra/Bloomberg

“Venezuela is on the verge of imploding,” Santos told Bloomberg TV Monday. “What we hope is that this implosion will be peaceful and not violent, because otherwise we will have a tremendous avalanche of more Venezuelans coming to Colombia.”

The migrant crisis is probably the biggest challenge facing Colombia at the moment, Santos said. Venezuelans are currently crossing the border into Colombia at the rate of more than 100,000 per month, according to data from the immigration authority, with many more arriving illegally.

Venezuela’s economy will contract 15 percent this year, according to the latest forecasts by the International Monetary Fund, while inflation accelerates to about 13,000 percent. As shortages worsen across the country, many people are lacking basic levels of nutrition.

Colombia is seeking a “peaceful transition” back to democracy in Venezuela, Santos said, but declined to say whether there are circumstances under which foreign intervention might be justified.

Australia’s central bank in ‘no particular rush’ to raise...
Scroll to top