Chinese ambassador and a reporter

China’s ambassador to the US is back in the headlines and is now warning that China could scale back purchases of Treasuries in a trade war.

Meanwhile, China’s $3B tariff response initially sparked a sigh of relief but it turns out that’s just the start. A reported at the Global Times in China says billions more tariffs are being cooked up. 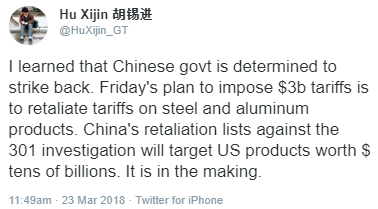 USDJPY looking to have a long week-end