Blog - Latest News
You are here: Home / Technical Analysis / Chart Of The Day: Euro Begins Week On Back Foot Ahead Of ECB Meeting

The Euro continued to weaken on Monday morning, entering a third day of losses against the US dollar. The slide continued despite Monday’s news that Eurozone Composite PMI was unchanged for April at 55.2, holding above the 50-point level that indicates expansion.

A rise in U.S. Treasury yields to 3 percent has helped boost the greenback to its highest levels in over two weeks. The US dollar has also been underpinned by a hawkish stance from the Federal Reserve. Fed officials have signalled additional interest rate increases in 2018 based on signs of positive economic growth.

EUR/USD has been in an uptrend since January of 2017 and remains above the 200 period simple moving average on the daily timeframe. However, the pair has been range bound between 1.2154 and 1.2554 for three months. On Monday morning EUR/USD broke below the lower trendline of a pennant pattern. A break below the 1.2154 level would expose the next major level of support at the 200 period simple moving average. 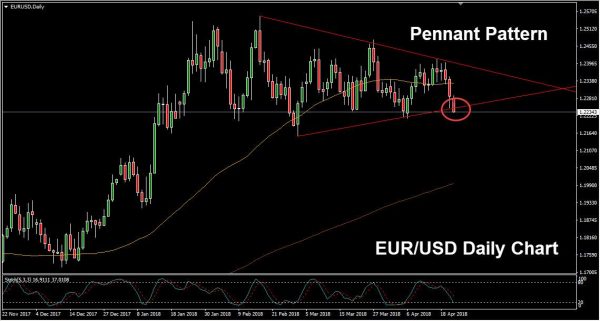