The US dollar is higher across the board after geopolitical tensions have eased and Fed speakers are making a case for a faster rate hike for US interest rates. The hawkish comments from Fed’s Loretta Mester contrasted with dovish comments from the European Central Bank (ECB) and Bank of England (BoE) officials which put downward pressure on their respective currencies. The highlights for the trading week will be the rate statements from the ECB and the Bank of Japan (BOJ) alongside the release of the first estimate of the first quarter growth in the US.

The EUR/USD lost 0.34 percent during the last five days. The single currency is trading at 1.2288 as investors await the ECB to keep rates and quantitive easing unchanged on Thursday, April 26 at 8:30 am. Trade war fears and actual war concerns waned this week after putting downward pressure on the US dollar. The dovish rhetoric from the ECB did not match the optimism from U.S. Federal Reserve officials and that was reflected in the pricing of the currency pair. 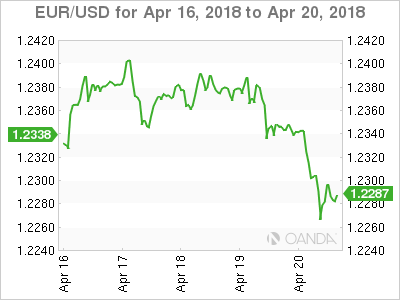 The market will be focused on the ECB statement for any clues about their exit from its massive QE program, but if caution wins out there might not be a lot to trade on as a slowdown in growth could persuade the central bank to wait. Mario Draghi’s comments on Friday at the International Monetary Fund (IMF) meeting called out the lack of traction in the first quarter. Economists polled about when the ECB will take the next step are divided with only 36 percent forecasting June and the rest divided between July and September.

The USD/CAD gained 1.15 percent during the week. The currency pair is trading at 1.2753 after the Bank of Canada (BoC) kept the benchmark rate unchanged at 1.25 percent on Wednesday and was read as dovish by the market by citing concerns about trade uncertainty and high levels of household debt. The use of the word cautious regarding future rate hikes weighted more than the positive comments on the economy overall. 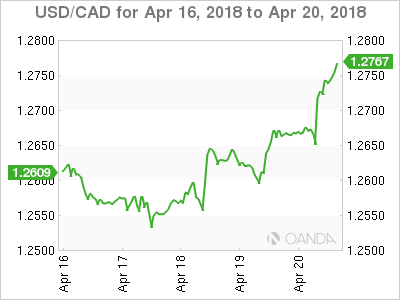 Canadian indicators fell short of expectations on Friday as the Consumer Price Index (CPI) came in at 0.3 percent and core retail sales was flat. Inflationary pressures had put the BoC in a tough spot as prices have risen 2.3 percent year over year despite the miss. Retail sales rose 0.4 percent, but the measure preferred by the central bank excludes auto sales, and that is where most of the momentum came in, as removing that component put the core retail sales at 0.0 percent.

Next week will be quiet for Canadian economic releases with only Wholesales sales on Monday April 23 at 8:30 am on the schedule. Retailers are expected to have increased their orders to wholesalers by 0.3 percent in March.

The GBP/USD lost 1.56 percent in the last five trading days. The currency pair is trading at 1.4014 after disappointing economic indicators and cooling inflation depreciated the pair who had touched pre-Brexit levels. To top it off the head of the Bank of England (BoE) said what the market was thinking the central bank could keep rates unchanged with Brexit negotiations in the background. The rally which started with BoE rate hike expectations in May is now gone as the probability is not 50/50 that the central bank will follow through with a rate rise. 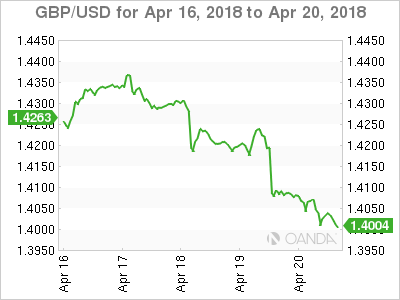 In 2014 BoE Governor Mark Carney was labelled an unreliable boyfriend by a member of parliament criticizing him about his contrasting opinions on rates back then. The BoE has been hinting at a higher rate, and in the latest monetary policy meeting there were two dissenters from the nine member panel. The comments from Carney now make it easier for that number to remain low for those members who wish to hike rates as inflation has stabilized while retail sales and other indicators have missed expectations.

The economic calendar in the UK will not feature a lot of indicator releases but the highlight will be the release of the preliminary GDP estimate for the first quarter. The UK economy is expected to have grown by 0.3 percent, but any improvement on the forecast will be cause for the pound to appreciate as it makes the May rate hike a stronger possibility.