For the best part of 24-months, equity markets have rallied steadily, matching the longest winning streak ever without a correction. That period ended abruptly in February when global stock indices tumbled into a correction brought on by worries about higher interest rates and exacerbated by complacency and a new threat of ‘trade wars.’

The prospect of a trade war extended the volatility into March and may watch over market sentiment for months to come, potentially sending ripples through the delicate negotiations over NAFTA and BREXIT.

Further, the threat of a wider trade war or even any confrontation with N. Korea could derail G10 central banks from returning to a normalized interest rate policy.

Investors can expect these ongoing geopolitical challenges to dictate market direction for the foreseeable future.

The Fed and other G10 central banks have waited patiently to begin to get out of their extraordinarily accommodative stance and finally normalize monetary policy. After a decade of near- or sub-zero rates, central banks are entering the era of ‘quantitative tightening.’

The Fed has started to shrink its balance sheet and has been raising rates for more than a year, while the ECB and BoE are starting to plan their own exit strategies. The great unwind of government bond holdings by central banks are expected to distort sovereign yield curves as central banks reduce their holdings of debt holdings back towards a pre-crisis sovereign holdings.

The Feds new Chairman, Jerome Powell, is leading the charge and removing accommodation in such a way as to lift inflation back to the Fed’s desired +2% target level without extinguishing growth prospects or letting the U.S economy overheat.

In his first appearance before Congress, February 27, Fed Chair Powell unnerved markets with his ‘hawkish’ demeanor – “he has no concerns about the flattening U.S yield curve and sees little chance of a recession in the next two-years.” Further, he stated that the data and fiscal stimulus enacted since December made him more confident that inflation is moving to target and that the Fed now must “strike a balance between avoiding an overheated economy and bringing PCE price inflation to +2% on a sustained basis.”

This has firmed up market expectations for three Fed rate hikes this year (as reflected in Fed funds futures). However, better growth, higher wages, and firming oil prices could collaborate to spark faster inflation in 2018, presenting a challenge for Fed policy. After last months +25 bps hike, fed funds is already pricing two-more hikes – June and December. However, if inflation makes a sudden resurgence it could spook the Fed into raising rates faster to blunt it.

The persistent weakness in the U.S dollar confirms that this rate path is ‘baked in’ at this point and any monetary policy surprises would probably come from the other global central banks. 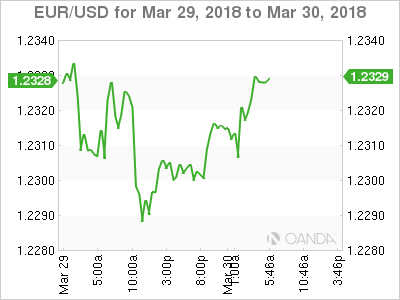 For now, other central banks are holding their policy steady, with only minor tweaks to lessen accommodation. The ECB is debating whether it should clarify when rates will rise (likely not till 2019), the BoE could hike a second time in May, and the BoJ remains committed to “ultra-loose” policy even though economic conditions have improved.

In the euro zone, the ECB remains satisfied with the effects of its policy on improving growth and investment. As for normalization, the governing council is unanimous in its view of policy sequencing, saying that interest rates will not be hiked before the bond-buying (QE) program is completed.

The BoE’s chief economist Haldane noted that the central bank is in “no rush” to raise rates, and that rates won’t remotely go back to levels seen in the past, but any inflationary threat to the cost of living will be met with more rate hikes. With that said markets are now betting that the next +25 bps hike by the BoE will arrive in May. That reckoning has sent the pound sterling (£1.4050) to test its strongest level against the dollar since the June 2016 Brexit vote.

Having secured a second five-year term, BoJ’s Governor Kuroda emphatically stated that the BoJ will continue, “powerful monetary easing” to achieve its price goal. Though headline CPI hit its highest level in nearly three years at +1.4% in January, it remains well short of the target. Still Kuroda does have an eye toward the future, saying that easing will not continue once CPI reaches +2% in “stable manner,” and that normalization, once it begins, will be very gradual. 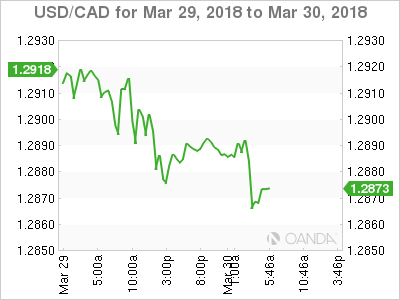 The BoC is expected to be one of the most active central banks throughout 2018. The Canadian economy is doing relatively well, and CPI inflation continues to move gradually higher. Aiding growth has been the rise in commodity prices, especially crude oil prices. However, NAFTA discussions are currently proceeding very slowly.

In Scandinavia, Nordic central banks (Norges and Riksbank) are expected now to be in a position to bring forward their own tightening approach. 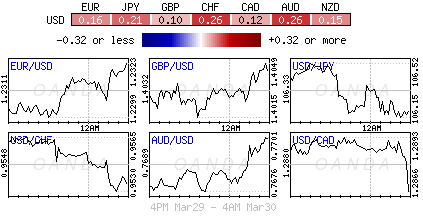 Geopolitical Risk Remains in the Background