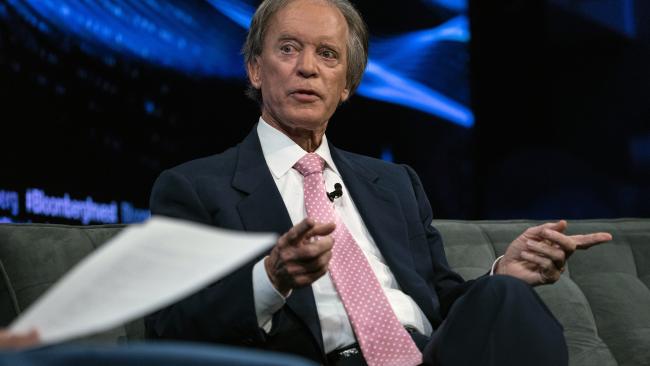 © Bloomberg. Bill Gross, fund manager of Janus Capital Management LLC, speaks during the Bloomberg Invest Summit in New York, U.S., on Wednesday, June 7, 2017. This invitation-only event brings together the most influential and innovative figures in investing for an in-depth exploration of the challenges and opportunities posed by the constantly changing financial, economic and regulatory landscape.

“The Fed’s purported three to four hikes this year beginning in March are likely exaggerated,” wrote Gross, who runs the $2.2 billion Janus Henderson Global Unconstrained Bond Fund. “The U.S. and global economies are too highly leveraged to stand more than a 2 percent Fed Funds level in a 2 percent inflationary world.”

The Federal Reserve raised rates by 0.25 percent Wednesday in response to a strong U.S. economy, the first hike since Jerome Powell became chairman last month. The median forecast of members of the Federal Open Market Committee is for more than three hikes for all of this year and three more next year, putting the Fed Funds target rate at 2.125 percent rate by the end of 2018 and 2.875 percent at the end of 2019.

“The Fed, under Jerome Powell, hopefully has learned that lesson, and should proceed cautiously, as must his counterparts around the globe,” Gross wrote.

The U.S. 10-year rate will fluctuate around 3 percent for most of 2018, Gross said. After the Fed decision it spiked above 2.9 percent Wednesday, the highest this month, before dropping later in the day. In January, when rates on the 10-year passed 2.5 percent, Gross pronounced the end of a 35-year bond bull market.

“Still, in my mind, this is a hibernating global bear bond market, not a beast,” Gross wrote in Thursday’s note. “That may come later.”

Gross’s unconstrained fund, which is structured to avoid losses in a rising rate environment, has returned 0.16 percent this year through March 20. It returned an annual average 2.4 percent over the last three years, outperforming 55 percent of its Bloomberg peers.

Universities With The Best-Paid MBA Graduates