Inflation in Australia failed to meet the Reserve Bank of Australia’s price target in the fourth quarter of 2017, similar to many other major economies, and updates on consumer prices adjusted for volatility early on Tuesday are expected to say the same story, kicking any hopes of a rate hike further into the future.

At 0130 GMT on Tuesday, data prepared by the Australian Bureau of Statistics are expected to show that the headline Consumer Price Index (CPI) has ticked up to 2.0% on a yearly basis in the first quarter of 2018, compared to 1.9% seen in the previous quarter. This, however, could likely be attributed to seasonal effects such as price rises in large seasonal components like pharmaceuticals and educational fees, rather than to permanent factors. Besides, the core measures, which trim for volatility and are paramount for monetary policy are said to have clocked in below the RBA’s target range of 2-3.0%. Particularly the weighted mean CPI is anticipated to inch down to 1.9% y/y after touching a 2.0% growth in Q4 2017, while the trimmed mean CPI is anticipated to remain unchanged at 1.8% y/y.

On April 3, RBA policymakers decided to maintain interest rates at a record low of 1.5% for the 18th consecutive time. Although they acknowledged improvements in the labour market, saying that the unemployment rate has “declined over the past year”, they admitted that household consumption remains a source of uncertainty as the meeting’s minutes indicated. Retail sales, a proxy for household spending, managed to gain momentum at the end of 2017 but wage growth continued to rise only modestly, hinting that inflationary pressures are unlikely to rise much at times when households are struggling to repay their overloaded debt obligations. Still, they remained hopeful that the unemployment rate could drop gradually, and wages could pick up steam as companies have already started facing difficulties finding skilled workers. 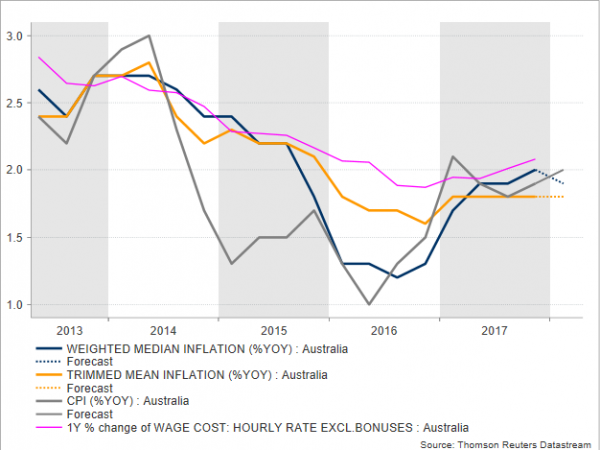 Besides the above, external risks to the economy also support no change in policy by the Bank. The US trade protectionism and specifically the US standoff with China raised fears for Australian exporters who are largely dependent on Chinese sales, despite their exemptions from aluminum and steel US import tariffs. While both countries have recently shown the willingness to resolve their differences through dialogue, a failure to reach an agreement on the trade front could find both countries activating their import tariffs. Under this scenario, economies linked to the Chinese economy such as Australia could see their terms of trade narrowing. Moreover, apart from trade politics, US monetary strategy seems to be a headache to the RBA given that rising US interest rates force Australian banks to raise their mortgage rates, even though the country faces a mounting debt burden.

Currently, the markets are pricing in a 0.41% probability for a rate hike in May, while they only see a 25-basis point increase only by mid-2019. Should Tuesday’s inflation readings surprise to the upside, this probability could increase, and investors could turn more optimistic on future monetary tightening, pushing aussie/dollar probably up to the 20-day SMA which currently stands at 0.7703. A bigger positive surprise could drive the market even higher towards the 50-day SMA at 0.7770, paring most of the losses made over the past three days. On the other hand, a worse-than-expected report could add further pressure to the currency, leading aussie/dollar down to the 0.7600 and 0.7500 psychological levels. Note that traders are currently betting a 25 basis point increase in rates coming by the mid-2019.