AUD/USD Elliott Wave analysis shows a three-year pattern completed on January 31. This suggests the price trend has shifted from up to down for the next several weeks and month.

Our 2018 AUD/USD forecast included a smooth start and rough finish. We were anticipating a mild break higher above 81 cents to finish off a large complex wave that began in September 2015. That mild break would put us on alert for a longer-term top and reversal.

The recent sell off by AUD/USD is deep enough to suggest the highs of late January 2018 may have completed the three-year wave. We are showing the wave as a W-X-Y pattern (Expanded Flat – Triangle – Zigzag). The recent break below the 50% retracement level is symptomatic that the previous trend is complete and the major trend has shifted towards lower levels on AUD/USD. 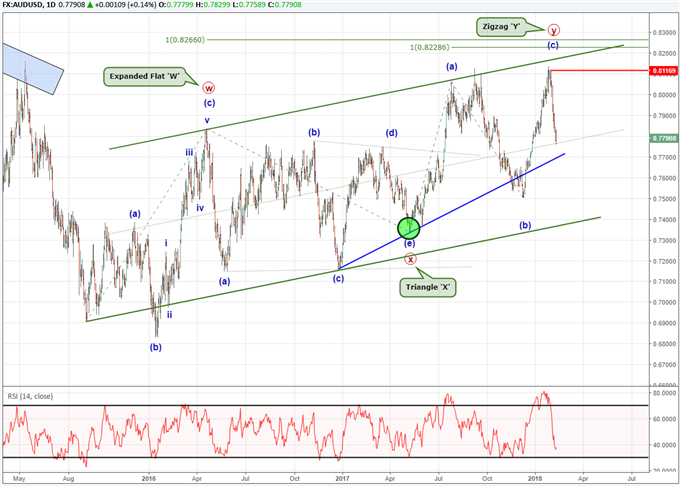 We are showing the minor wave in January that finished wave ‘Y’ was a truncated diagonal pattern. Therefore, the orthodox termination point of the wave was the January 31 high of .8117. As a result, this price point is the key level for AUD/USD for any subsequent bearish moves.

As the bull wave that began in September 2015 was a complex correction, we can anticipate the next higher probability move is the entire wave becomes completely retraced at some point in the future. Therefore, we will establish longer-term targets of a big bear wave driving down towards 69 cents. 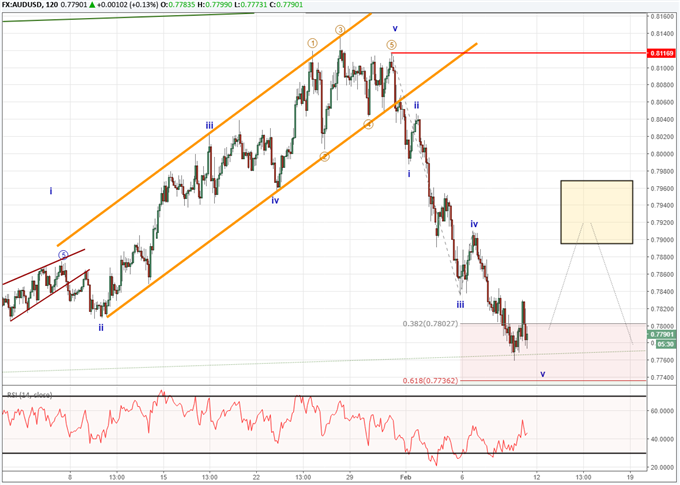 The AUDUSD Trade Set Up

Since the minor bearish impulse wave from January 31 is nearly complete, we will likely see a bullish rebound beginning soon. Therefore, we will look to establish a short position at higher levels on a partial retracement higher.

Many times, impulse waves retrace to their fourth wave. In this case, that fourth wave hovers in the 79 handle. We will await a rebound to 79-80 cents then consider establishing a short position.

What is the Elliott Wave Theory?

Elliott Wave Theory is a forex trading study that identifies the highs and lows of price movements on charts via wave patterns. Traders often analyze the 5-wave impulse sequence and 3-wave corrective sequence to help them trade forex strategically. We cover these wave sequences in our beginners and advanced Elliott Wave trading guides.

Why should traders be mindful of the risk to reward ratio?

At DailyFX, we studied millions of live trades and found one strong factor influencing the profitability of the trader, the risk to reward ratio. Our Traits of Successful Traders research found that traders who risked less than their profit target tended to have more consistent results because they did not need to be right on every single trade. This alleviates a lot of pressure on the trader so when you do capture that strong trend, that one winning trade can cover multiple losing trades bringing more stability to your results.

New to FX trading? We created this guide just for you.