Rebounds in the latest report. 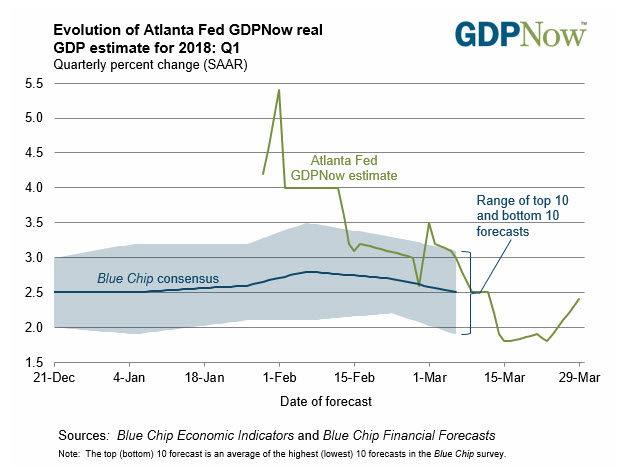 In their own words:

The GDPNow model estimate for real GDP growth (seasonally adjusted annual rate) in the first quarter of 2018 is 2.4 percent on March 29, up from 1.8 percent on March 23. The forecast of the contribution of inventory investment to first-quarter real GDP growth increased from 0.66 percentage points to 1.21 percentage points after yesterday’s advance releases of wholesale and retail inventories by the U.S. Census Bureau, yesterday’s GDP release by the U.S. Bureau of Economic Analysis (BEA), and this morning’s release of the revised underlying detail tables for the National Income and Product Accounts by the BEA.

The next report will be released on Monday, April 2.

The NY Fed Nowcast, another model of GDP growth from a Fed district, came in at 2.85% last week.  The next report will be released tomorrow (Good Friday). The US stock and bond markets will be closed in the US, but it is not a national holiday,

Forex Preview for Q2: Euro, USD and JPY Themes at the Forefront of FX