Find out why some traders just stand out from the crowd with the DailyFX deep, deep dive into the Traits of Successful Traders

The ASX 200’s downtrend has accelerated quite sharply with Monday’s big fall but, so far, has been arrested by support at an interesting chart point.

In my last technical look at the Sydney stock benchmark I suggested that the old, narrow, 150-point trading band, which constrained trade between May and October 2017, might now form the most obvious prop for the index as it approached those levels once again. Well, so far it has. Monday’s intraday low not just the low point for the index since early June, 2017 but also just about at the low point of that range base. 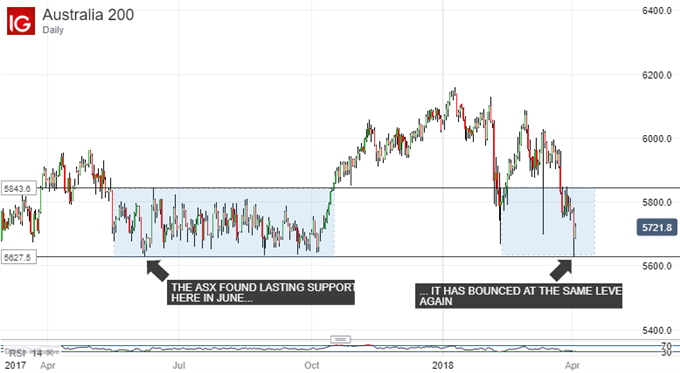 For the moment it looks as though that point is indeed going to hold. It has only been touched momentarily on an intraday basis this week and the ASX has since bounced back some way above it.

However, caution is surely warranted. The speed with which the index sped straight to the bottom of that old range was quite surprising and, if you are so-far uncommitted, it might make sense to watch this week’s daily and weekly closes for confirmation that the old range is indeed back in play and holding.

After all the ASX is now in a curious downtrend channel, strongly validated by three intraday lows on its lower trend-line boundary. 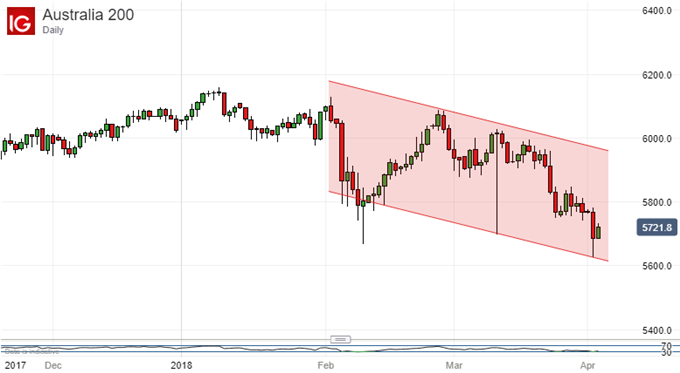 And the bulls will probably need to retake recent highs in the 5814 region at least if they’re to make a convincing fight of it. So far they’re not showing the necessary resolve. The index looks to be stuck in a range between the lows of this week and the highs of last, with at least some bias to the downside as long as risk aversion rules global markets.

Whether you’re new to trading or an old hand DailyFX has plenty of resources to help you. There’s our trading sentiment indicator which shows you live how IG clients are positioned right now. We also hold educational and analytical webinars and offer trading guides, with one specifically aimed at those new to foreign exchange markets. There’s also a Bitcoin guide. Be sure to make the most of them all. They were written by our seasoned trading experts and they’re all free.

Follow David on Twitter@DavidCottleFX or use the Comments section below to get in touch!

73% of Traders Are Net-Long, Yet Bitcoin Sentiment Gives Mixed Signal