Find out what makes the best traders so much better than the rest in our deep, deep dive into The Traits of Successful Traders

The ASX 200 put in an impressive run of gains from mid-late February but this month has seen the resumption of a downtrend which remains firmly in place.

The peaks of February 26 at 6084 marked a significant top for the index which has been sliding just about ever since. The bulls made quite a convincing foray higher in early March, but that faded on March 9 at 6030. They made another one on March 16 but that petered out too.

Now the Australian stock benchmark is once again well under the crucial 6000 level in a well-respected downtrend channel. 6000 remains a point at which the index just can’t seem to get comfortable. It managed a few months above that point in 2008, before the financial crisis hit with full force, and has consistently wilted around it this year. 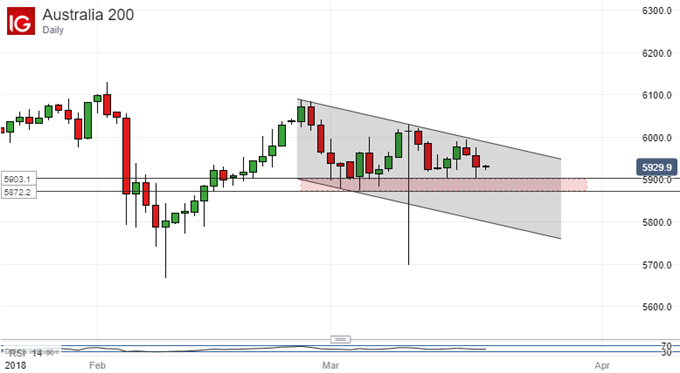 From current levels around 5927 the ASX is hovering above a clutch of support between 5872 and 5903. Interestingly that first level is all but right on the point which would mark the 50% Fibonacci retracement of the rise from the lows of February 9 to that peak of February 26. Below it lurks the 61.8% retracement at 5827.9 and 76.4% retracement at 5766.4

To the upside 5985 marks the top of the descending channel, but it doesn’t look for the moment as though the bulls have sufficient resolve to test it.

For now, it’s probably a good idea to keep an eye on that box of support shown in red on the daily chart above. Daily closes below it will likely spell trouble for the bulls, whereas they can retain some hope for as long as the index is above those levels even if the overall downtrend remains firmly in charge.

Whether you’re new to trading or an old hand DailyFX has plenty of resources to help you.

Be sure to make the most of them all. They were written by our seasoned trading experts and they’re all free.

Follow David on Twitter@DavidCottleFX or use the Comments section below to get in touch!