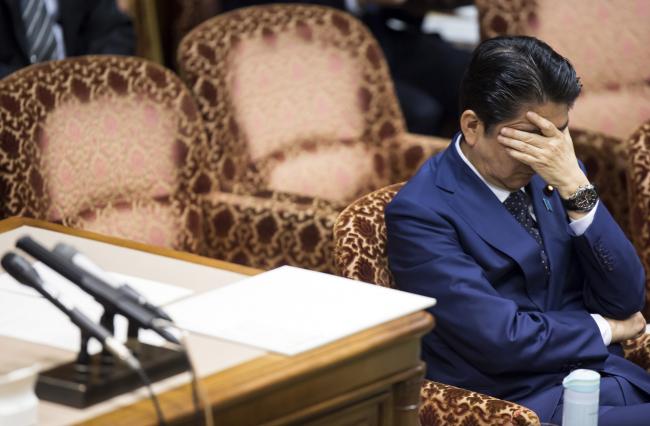 Two of the polls — conducted separately by the Asahi newspaper and NNN news network — showed public backing for Abe had fallen to its lowest level since he took office in 2012. They were conducted after the finance ministry admitted last week it had doctored documents related to the sale of public land at a heavily discounted rate to a nationalist school operator with ties to Abe’s wife.

Abe on Monday again denied that he or his wife, Akie, were involved with the land sale or document-tampering, and called on the finance ministry to carry out a thorough inquiry and to restore trust. A finance ministry official committed suicide earlier this month, leaving a note saying that he feared being blamed for the scandal, public broadcaster NHK reported.

“Public trust in the administration as a whole has been shaken by the alteration of documents, and I take this seriously,” Abe said Monday. He reiterated that any involvement in the land sale would merit resignation.

The scandal has thrown doubt over Abe’s chances of winning a ruling party leadership election in September, which would give him a shot at becoming the country’s longest-serving prime minister. In the shorter term, it will hamper his government’s plans to pass labor market reforms and slow the debate on constitutional revision.

“The opposition is very weak and I don’t think people want them to take over,” said Tsuneo Watanabe, senior research fellow at the Sasakawa Peace Foundation. “So the question is what happens in the party presidential election.”

The yen strengthened on the fall in support for the cabinet, which has championed a weaker currency. Japanese stocks declined on the polls and a report saying Apple Inc (NASDAQ:). is designing and producing its own device displays.

The Kyodo poll found former Defense Minister Shigeru Ishiba was the most popular candidate to become party leader in September, with 25.4 percent of respondents picking him. Second was Shinjiro Koizumi, son of a popular former prime minister, with Abe in third place.

Public opinion may not be the most important factor in the selection of the party leader, a decision made by members of the ruling Liberal Democratic Party.

“If any further trouble emerges, that will be different, but as of now it’s very difficult to connect Abe himself to the mishandling of documents,” said Watanabe. He said he expects the prime minister to win a third term as party leader.

Selected results of the Asahi poll: