The Federal Reserve raised interest rates by 25bp today but instead of rallying the sold off across the board. climbed to its strongest level in more than a month, broke below 106 while broke through 2 big figures to trade as low as 1.2890. Aside from raising interest rates, the Federal Reserve also upgraded its 2018 unemployment and growth forecasts. These changes should have been positive for the dollar but instead, the greenback sold off for 3 reasons:

Investors were hoping that the dot plot would shift to 4 hikes this year instead of 3 and when that did not happen they were sorely disappointed. While the Fed expects to tighten 3 times in 2019 up from 2, investors are focused primarily on the year ahead as they see the slower tightening cycle as a need for patience.

#2 Powell Is Cautious On Inflation

According to the , the Fed believes that the economic outlook strengthened in recent months and inflation will move up, stabilizing around 2%. However in his , Fed Chair Powell said pressures on inflation have been very gradual and they don’t get a sense from data that inflation is about to accelerate.

The Fed Chair also wants to see productivity increase and wages rise. They have been surprised at how modest wage gains have been, given the overall strength of the labor market. Also, they are leery about the impact of tax cuts and worried that trade tensions could pose a risk to their outlook.

Unlike his on the economy, today’s press conference was not unambiguously hawkish and for that reason alone, investors were unimpressed and returned to selling . In the near term, we expect the dollar to extend its losses as Asia and Europe respond to today’s developments.

The focus now shifts to Thursday’s . There’s talk that the BoE will raise interest rates after today’s solid but we believe this speculation is baseless. The market is only pricing in 16% chance of quarter-point hike but those odds go up to 66% in May and about 75% in June. This means that while most investors don’t expect the U.K. central bank to follow in the Fed’s footsteps, they are looking for hawkishness that would reinforce their outlook for summer tightening. is trading strongly ahead of the rate decision and will accelerate its gains if the BoE confirms that rates will need to rise faster and earlier than previously expected with no qualifications. Taking a look at the table below, there’s been as much improvement as deterioration in the U.K. economy but there’s strength where it counts – namely , the , and composite PMIs and even . Brexit negotiations have moved forward an inch with the EU transition deal that could be confirmed on Friday. There is no press conference scheduled after the BoE meeting, so the main focus will be on the monetary policy statement and the number of votes in favor of keeping rates steady versus a hike.

If the BoE statement is hawkish and 1 or more members vote in favor of a hike, will soar. in particular will hit a fresh 10-month low below .8645. If monetary policy committee members vote 9-0 to keep rates steady, we could still see EUR/GBP slide, though the sell-off would be more modest. In the unlikely scenario that there’s a tinge of caution in the statement to offset hawkishness, EUR/GBP, which hasn’t rallied in 11 trading days, could pop back up to 88 cents. 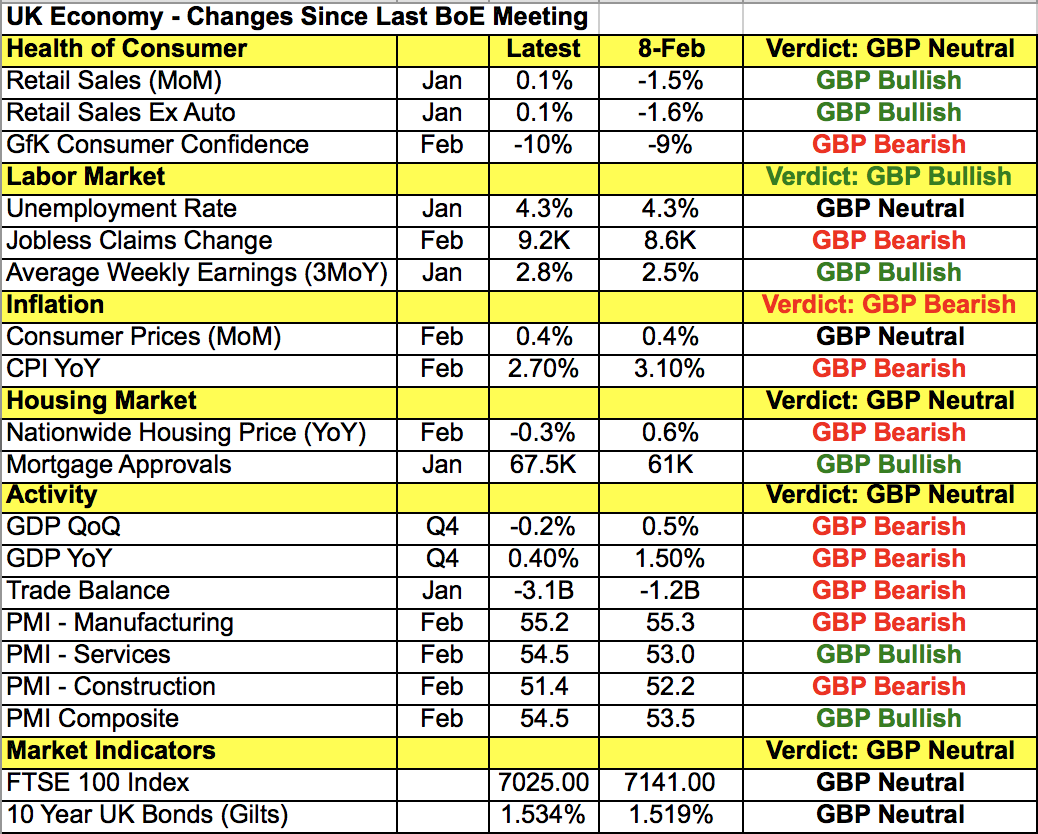 The Reserve Bank of New Zealand’s did not have a significant impact on the but there’s no doubt that the was more negative than positive for the currency. The RBNZ left rates unchanged and said that while growth is expected to strengthen, inflation is expected to weaken further in the near term. That means there’s no tightening in sight from the RBNZ despite some signs of improvements in the economy. NZD/USD is supported by post-FOMC
weakness but the New Zealand dollar could extend its losses against the
and
.


The traded sharply higher today ahead of tonight’s . Stronger job growth is expected, especially on a full-time basis as job losses were seen in February. If the labor data beats, we could see AUD/USD break all of the resistance between .7775 and .7810. Yet the currency pair hit the hardest by
weakness was
, which shed 1.3%. Reports that the Trump administration dropped its demand that all vehicles made in Canada and Mexico for export contain at least 50% U.S. content triggered the initial rally that extended post FOMC. If the trade developments prove true, it would be a huge win for Canada as it is one of the greatest points of contention between the two nations.
also rose 3% today, adding fuel to the loonie’s rise. Technically, USD/CAD has fallen below the first standard deviation Bollinger® Band and while the 20-day SMA could serve as some support, we think USD/CAD will sink to 1.2800.


Last but certainly not least, moved above 1.2300 on the back of the FOMC . The German
and Eurozone PMIs are scheduled for release Thursday and chances are they will be softer with the ZEW survey, industrial production and factory orders falling over the past month. However, if the setback is not significant,
could keep euro supported.

BOJ’s Wakatabe says fiscal policy is up to the government