After a relatively dull 2016 in Initial Public Offerings (IPOs), 2017 was more interesting than ever, but not for the traditional reasons. Rather, because of new developments on the asset front. Market participants were introduced to cryptocurrencies on a massive scale. The craze surrounding digital currencies brought wealth to some and chaos to everyone who follows the once relatively calm financial markets.

One offshoot of the crypto-craze was the creation of the IPO’s younger sibling, the Initial Coin Offering or ICO. As the prices of and for example, zoomed higher by more than a thousand percent this year, scores of digital entrepreneurs sought to create the next big coin or token.

ICOs also became a new tool for cash-strapped startups trying to circumvent the traditional routes for raising investor capital such as VC funds or IPOs. For months during the first half of 2017 the ICO market was totally unregulated. However, in July, the US Securities and Exchange Commission (SEC) stepped in, issuing a report detailing an investigation they were conducting regarding whether a German ICO had violated federal securities laws, using the report as template for how the SEC will view ICO activity going forward. From the report:

“The Commission stressed that those who offer and sell securities in the U.S. are required to comply with federal securities laws, regardless of whether those securities are purchased with virtual currencies or distributed with blockchain technology.”

Not all ICOs however, seek to raise funds for the founder. Some are service-specific and exclusive to a certain app or blockchain. These types of coins are earned by performing an action on a certain platform; the liquidity of such alt-coins remains unknown at this point. In many such cases the return on investment or the possibility of cashing out is doubtful. 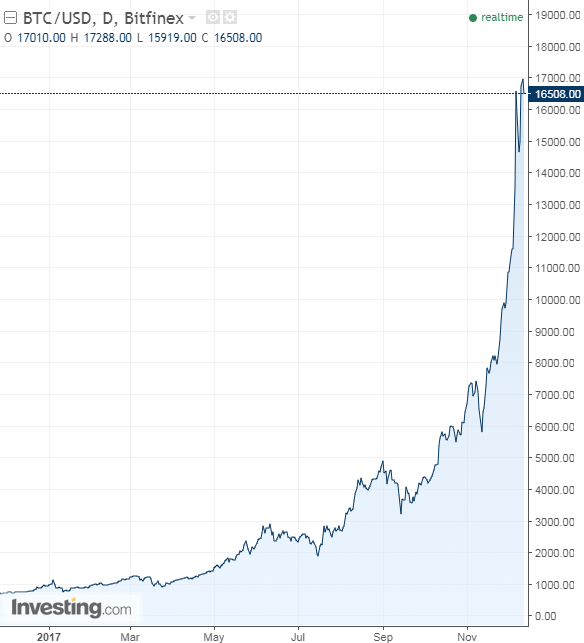 Here’s a look at the biggest names in IPOs and ICOs in 2017. 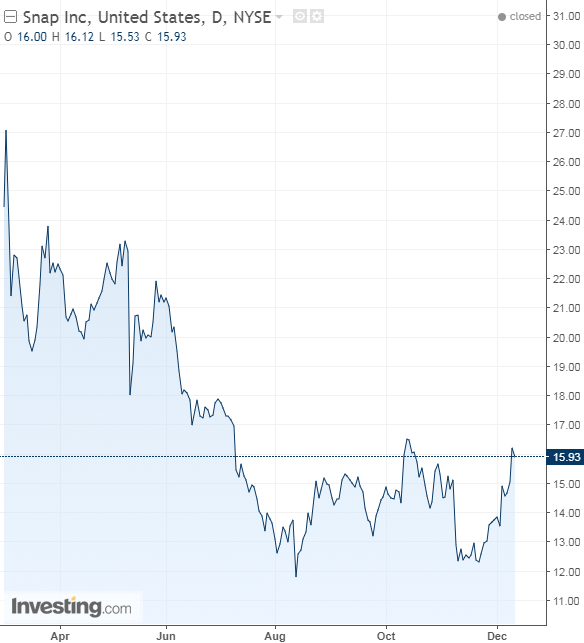 Snap (NYSE:), the parent company of the popular Snapchat mobile application, publicly issued shares for the first time at the beginning of March. After a year of speculation surrounding a possible IPO, the company announced shares would be priced at $17, reflecting a market capitalization of $20 billion dollars.

The day before the IPO, we noted that we were not convinced Snap was worth its lofty valuation. The company had too many unresolved issues and its growth prospects weren’t stellar.

Nevertheless, Snap began trading at $24 and three days later even $29, a trading cycle beneficiary of all the hype. However, as the year progressed, Snap’s glow dimmed; it lost much of its appeal in investors’ eyes. The company’s growth during the after the IPO was insufficient and the share price steadily slipped, hitting a low of $11 in August.

Snap launched an app redesign, in hopes of attracting new users to its platform and a route to a sustainable growth trajectory. However, with Facebook’s (NASDAQ:) Instagram standing in the way, there’s still a long road ahead for Snap.

Blue Apron’s (NYSE:) founders had a novel idea. People generally like home cooked meals, but the hassle of buying groceries, finding a recipe and prepping the food was a turn-off for many. Blue Apron’s innovation: a new way of cooking—the customer receives their meal of choice delivered raw and uncooked, but with everything sliced, diced and perfectly portioned, so that all the ingredients can easily be combined and quickly cooked at home. When the company IPO’d at the end of June, hopes were high. Shares started trading at $10 on the NYSE.

Can Blue Apron compete with Amazon? That remains to be seen, but we are not optimistic. CEO and co-founder Matt Salzberg stepped down at the end of November and was replaced by CFO Brad Dickerson. Upper management may have been seriously shaken up but an actual turnaround is far from guaranteed. 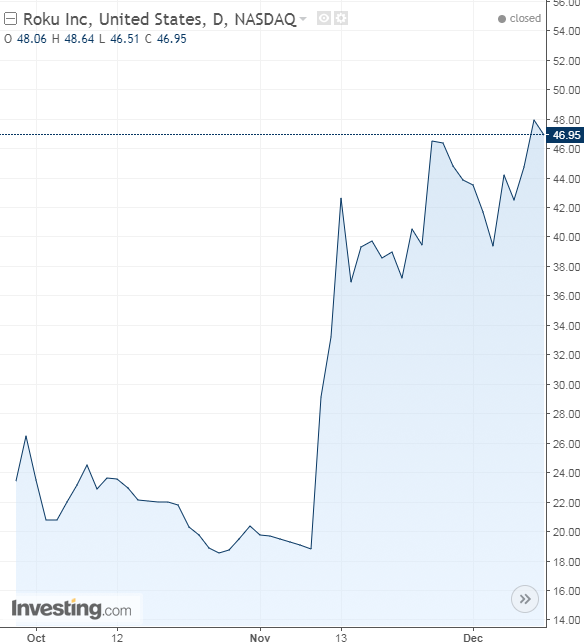 While two of this year’s biggest IPOs have been disappointments, the market success story for 2017 comes from the internet streaming world in the form of Roku (NASDAQ:).

Roku manufactures streaming players that connect to customer TVs. The players, which connect to the internet, allow users to stream content directly to their TV. Via Roku devices it’s possible to stream free content as well as connect to such paid providers as Netflix (NASDAQ:) or HBO (NYSE:). Roku’s business appeared at the right time. Streaming content over the internet has boomed in the US, evident from the impressive subscriber numbers for Netflix, for example, which currently boasts 52 million accounts.

Roku—unlike Snap and Blue Apron—delivered in its first . Revenue jumped over 40% year-over-year, and hours streamed grew by 58%. Over the three days following the report, shares spiked, moving from $18 to $42.

Of course, one earnings report isn’t enough to guarantee that a company is a good investment. It’s important to note that Amazon’s competitive device, Fire TV has been available since the mid-2000 and sells at a similar price point. Nevertheless, Roku has been able to successfully compete thus far. Still, caution is always in order when you’re going up against Amazon.

FileCoin is a Protocol Labs company aiming to create a decentralized storage network, where users can rent out unused storage space on their computers or devices and be remunerated in FileCoins. The development team uses IPFS, or the InterPlanetary File System, touted as the new and futuristic way of file sharing, adding to the excitement of the project. The ICO took place at the end of the summer and included such pre-sale insiders as Sequoia Capital, one of the world’s most prominent VC firms.

Tezos fashions itself as a new, improved Ethereum. Both tokens offer decentralized ledgers and smart contract platforms implemented on top of a blockchain. However, Tezos developers have issues with Ethereum’s governance, mainly the way it hard forks to upgrade the blockchain. Tezos proposes a new protocol in which users vote to implement changes on chain, instead of forking. Additional differences include the coding language and consensus.

The Tezos Foundation rather than the founders controls the funds. The founders and foundation president are currently embroiled in a dispute over control of the project per Reuters, making the success of the new blockchain an open question. 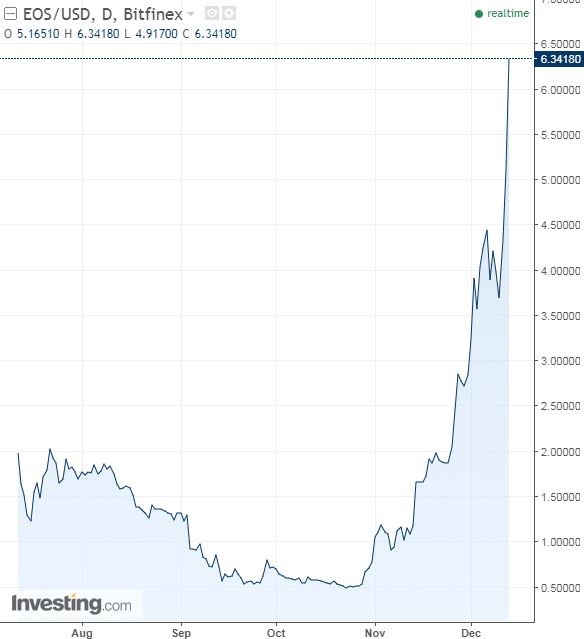 Much like Tezos, is another blockchain platform on which smart contracts and apps can run. Similar to Tezos, its founders take issue with Ethereum’s governance and hard forks and are aiming to establish a legally binding constitution to create a common jurisdiction for disputes. EOS also seeks to solve scalability problems by relying on Graphene technology, which should theoretically achieve up to 100,000 transactions per second (TPS), compared to Bitcoin’s 7 TPS or Ethereum’s 15 TPS.

As a transfer protocol, EOS would get blockchain applications much closer to existing speeds for payment methods; for example, it’s estimated that Visa (NYSE:) currently processes about 45,000 TPS. The EOS project is still in development, so all marketing promises should be taken with a grain of salt. However, it’s clear that EOS is another step toward making blockchain sustainable on a massive, commercial scale.

Gold At Critical Juncture. Watch These Catalysts For What’s Next
Scroll to top